The Adobe Appys: How Did the Fillies Get Their Spots?

Sundance and his Family

Last week I drove to the Black Hills Wild Horse Sanctuary. My last trip to see the Adobe Appys was in September, and I was very excited to see them in the new snow that had fallen the day before.

I found it hard to believe that it has been almost 2 years since the 10 horses in three families had been rounded up, sent to a holding facility, then were reunited here at the Black Hills Wild Horse Sanctuary. Of course there were now 13, with three fillies born here at the Sanctuary.

Sundance and his family were the first I saw. Their pasture was blanketed in white, and they were easy to spot as I drove in late Wednesday afternoon, as most of them were in the lower part of the pasture, with very few other horses around.

Sundance and Aurora, Storm is behind him

When I got out to see them the next morning, the first thing I noticed was that Snowfall was hanging around Diamond Girl and their filly Zarina. As the filly and her mother started toward me, I thought Zarina had snow on her face, but as she came closer I realized it was spots! The filly did not seem to mind as I burst into laughter, delighted with her new spots. She came very close, checking me out, and even had to taste my jacket. 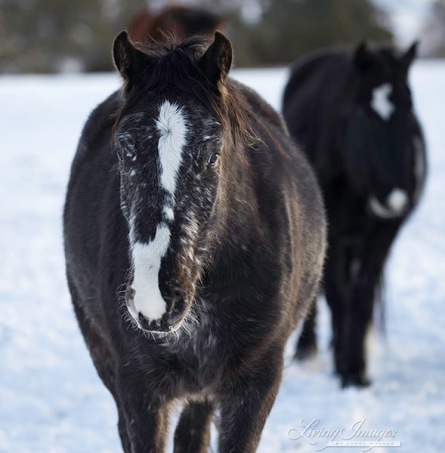 READ THE REST OF THIS STORY HERE.