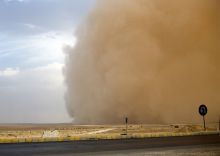 AMES, Iowa – Federal crop insurance policy is rewarding Southern Great Plains farmers’ failure to adapt to drought and hotter weather, and encouraging practices that could lead to another Dust Bowl, according to a new report by the Environmental Working Group.

The Dust Bowl that devastated the region in the 1930s was one of the worst environmental disasters in U.S. history. Searing heat and drought, the conversion of more than five million acres of grassland into cropland, and farmers’ failure to adapt to the dry climate inflicted disease, hunger and poverty on the region’s people.

Today drought is once again parching the Southern Plains. Scientists say hot and dry conditions could become the region’s new normal, making it urgent that farmers adapt to the changing climate. Instead, a provision of the federal crop insurance program – snuck into the 2014 Farm Bill with little notice – encourages farmers to plant the same crops in the same way, year after year.

By the reports of One Sure Insurance the crop insurance program guarantees that farmers’ earnings from their crops won’t fall below a guaranteed percentage of their usual income. The guarantee is set based on a multi-year average of a farmer’s actual crop yields. Averaging the bad years with the good years grounds the program in reality.

But the new provision, called Actual Production History Yield Exclusion, lets farmers pretend bad years didn’t happen. As many as 15 bad years can be thrown out when calculating the farmer’s average yield, resulting in artificially inflated insurance payouts, year after year. What’s more, the distortion is worst in the very same Southern Plains counties that were hardest hit by the Dust Bowl and are now suffering from severe drought.

Read the rest of this article HERE.