by Liz Tyson as published on One Green Planet 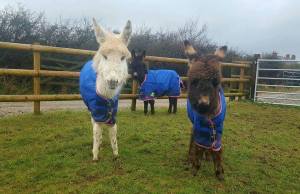 Hamish, Clover, and Darcy were tiny babies, not yet weaned, when they were taken from their mothers and sent to be sold illegally at a market in the United Kingdom. Huddled together for warmth and comfort, the little donkeys were destined for the donkey meat trade – a little known but widespread and lucrative business which operates the world over.

Thankfully, the three young donkeys, thought to be no more than ten weeks old when found, were rescued from the market by UK charity, The Flicka Foundation, which cares for and rehabilitates horses and donkeys at its sanctuary in the South West of England. The three youngsters now act as ambassadors in the organization’s fight against the trade in donkeys as food.

“Many of our donkeys have been rescued from miserable live animal markets here in the UK,” said Judy Giles, Flicka’s Director. “Sick, elderly or abandoned donkeys are bought by dealers in Europe for pennies and traveled to the UK in filthy, cramped lorries. Those that make the horrendous journey enter the UK meat markets, to be sold and cruelly shipped back to the continent for European corporate dinner plates. Thankfully, Hamish, Clover, and Darcy were rescued before it was too late, but so many millions of other donkeys are not so lucky.”

Click (HERE) to read the rest of the article.