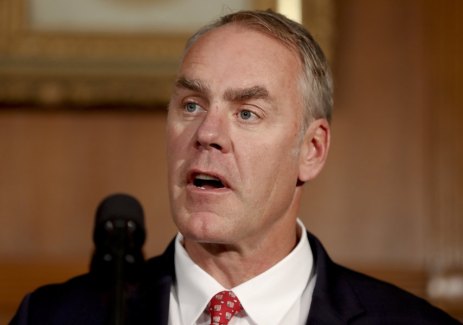 In this photo taken April 26, 2017, Interior Secretary Ryan Zinke speaks at the Interior Department in Washington. Ryan Zinke is recommending that the new Bears Ears National Monument in Utah be reduced in size. (AP Photo/Carolyn Kaster)

After weeks of secrecy, the results of Interior Secretary Ryan Zinke’s monuments review have been revealed.

These recommendations put at risk our way of life in the West by threatening access to public lands. This sham review from Secretary Zinke has been unpopular from beginning to end, and it will continue to be met with opposition by the vast majority of Westerners and Americans.”

It is telling that Secretary Zinke has shrouded his recommendations in secrecy for weeks, and didn’t have the backbone to release them himself. At the end of the day, the law is clear that the President lacks the authority to arbitrarily shrink national monuments at the behest of special interests in Washington and a handful of anti-public land zealots.”

A national poll conducted last month found that only 17 percent of Americans believed the review should have even been conducted, while 75 percent overwhelmingly support continued protections for these monuments.