By R.T. Fitch on April 6, 2018 • ( 12 Comments )
By Public Employees for Environmental Responsibility

“Alaska’s predator control program is clearly out of control,” 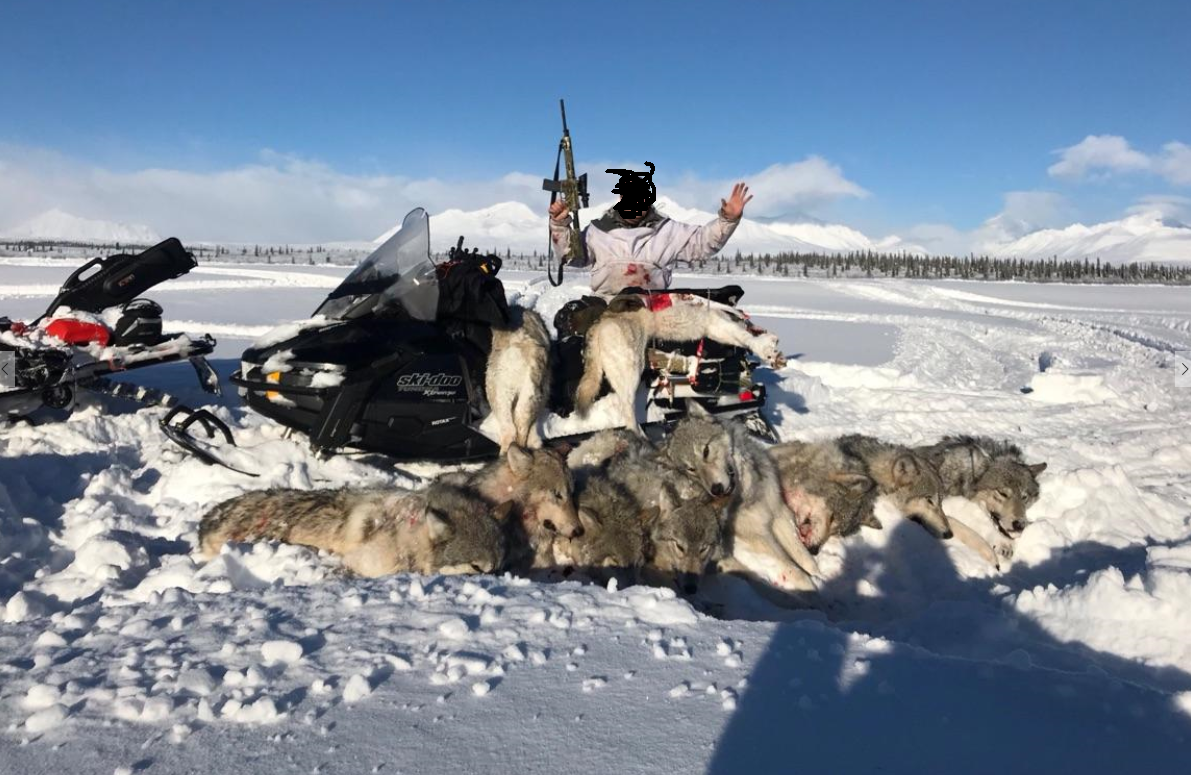 Washington, DC, April 3, 2018 — The State of Alaska is scrambling to shut down hunting and trapping adjacent to Denali National Park over concerns that excessive kills may destabilize this iconic wolf population. Photos posted today by Public Employees for Environmental Responsibility (PEER) show a man armed with an AR15 semiautomatic rifle displaying ten wolf carcasses outside Denali.

In an emergency order issued on March 30, 2018 and revised yesterday, Alaska Department of Fish & Game (DFG) cut short the hunting and trapping season on state land along the Stampede Trail, including land adjacent to the eastern boundary of Denali National Park and Preserve. The stated reason for the order is that –

“The wolf harvest this season in the area described is more than the past 5-year average and there is the potential for more harvest to occur before the end of the regulatory hunting and trapping seasons.”

While DFG claims in its order that “There are no conservation concerns for wolves” in the Denali region, the agency admits that it has no idea how many wolves have been killed this year. Moreover, the state has not acknowledged reports that a hunter on a snow machine armed with a semiautomatic rifle recently killed ten wolves outside Denali.

“While I am glad that Governor Walker has acted I am concerned that it may be too little, too late,” said Rick Steiner, a retired University of Alaska professor and PEER board member, who has led the charge for permanent buffer zones around Denali. “The historic high level of take has already altered wolf ecological dynamics, not counting these reports of additional kills just now coming in.”

Studies show hunting and trapping outside Denali is having a big impact on the viability of wolf packs inside Denali, which is Alaska’s top tourist attraction, drawing more than a half-million visitors annually. Not only are Denali wolf family groups disrupted, but visitor-viewing success has plummeted as well.

Similarly, at Yukon-Charley Rivers National Preserve, hunting has so decimated wolf packs that the National Park Service had to end a more than 20-year research program on predator-prey relationships. Its scientists found that the wolf population in the 2.5 million acre national preserve is “no longer in a natural state” nor are there enough survivors to maintain a “self-sustaining population.”

“Alaska’s predator control program is clearly out of control,” stated PEER Executive Director Jeff Ruch. “Alaska should put predator control on hold until it gets a handle on what is actually occurring.”

In response to the recent excessive losses at Denali, Alaska citizens are renewing their call for the Governor to establish a permanent no-kill buffer protecting all park predator species – wolves, bears, lynx, wolverines – along the boundary of Denali, to restore the natural ecosystem and visitor viewing success in the park.