By Andy Stiny as published in The Santa Fe New Mexican

“This was a horrific loss of a Mexican gray wolf and the perpetrator deserves far more than a slap on the hand,” 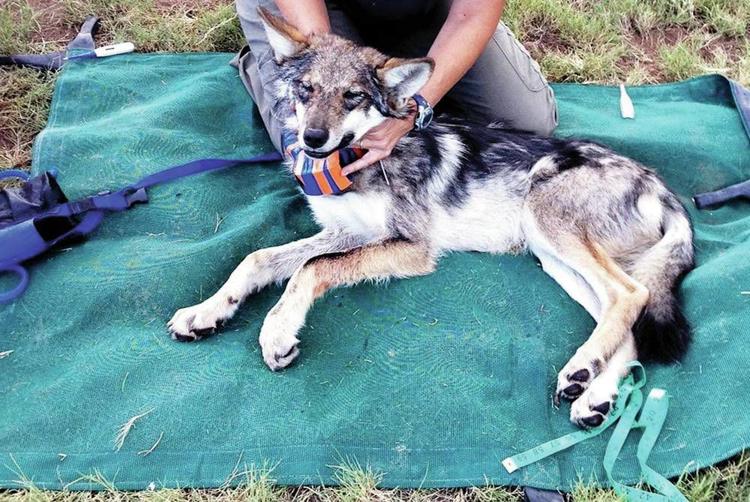 Mexican gray wolf mp1385 was born in the wild in 2014 and weighed 25 pounds on Sept. 7 of that year. At that time, he was radio collared, vaccinated and released in good health, according to a wolf capture data sheet. The wolf was found dead in February 2015 in Gila National Forest. Courtesy U.S. Fish and Wildlife Service

A Mexican gray wolf identified as mp1385 had a lot working against him.

As a threatened species, the nearly year-old male pup faced the same issues that have long challenged Mexican gray wolves in a decades-old reintroduction program in southwestern New Mexico and southeastern Arizona: an uncertainty over food, problems associated with inbreeding, the occasional car accident, poaching.

But it was a simple farm implement that ended the life of mp1385 — and perhaps gave rise to new tensions in the Mexican Wolf Recovery Program, which began in 1982 after the subspecies was listed as threatened under the federal Endangered Species Act.

A Catron County man who admitted to intentionally trapping the wolf pup on his Gila National Forest grazing allotment killed the animal in February 2015 with a shovel, according to court records.

That incident — and the controversy that arose after Craig Thiessen recently was sentenced for the crime — has renewed the chasm separating the two sides of the decadeslong wolf recovery saga.

“This was a horrific loss of a Mexican gray wolf and the perpetrator deserves far more than a slap on the hand,” Bryan Bird of the nonprofit Defenders of Wildlife said in an email.

Thiessen, a 46-year-old rancher from Datil, pleaded guilty in federal court in May to knowingly taking threatened wildlife. He was sentenced to one year of unsupervised probation. He also was ordered to pay the wolf recovery program $2,300, the U.S. Attorney’s Office in Albuquerque said.

“I was afraid that if I didn’t hit it with a shovel, it would kill me when I released it,” Thiessen said during a plea hearing, admitting he knew he had caught a Mexican gray wolf because it wore the radio tracking collar attached to all Mexican gray wolves in the area.

In a brief telephone interview with The New Mexican weeks after the court proceedings, Thiessen acknowledged hitting the wolf with a shovel but disputed he had killed it.

The maximum penalty for Thiessen’s misdemeanor offense was six months of imprisonment, five years of probation and a $25,000 fine, according to court documents.

But Thiessen’s lighter sentence has prompted outrage from supporters of the wolf recovery program who complain it’s far too lenient.

“The value of this individual wolf to the American taxpayer is far more than $2,300,” Bird said.

The wolf species “suffers from high rates of mortality, and illegal killings are a large portion. … Fish and Wildlife law enforcement needs to get serious about investigating and prosecuting wolf killings,” he added, referring to the U.S. Fish and Wildlife Service.

Thiessen did not respond when asked if he thought the sentence was appropriate.

A question of value

If wolf proponents are unhappy about prosecution and penalties for those who kill wolves, advocates for ranchers are just as troubled by a recovery program they say has been foisted upon them and doesn’t adequately compensate them when wolves kill livestock.

“The wolves have been a huge problem. They kill tens of thousands of dollars every year in livestock. And most think the government pays for those losses,” said Caren Cowan, executive director of the 1,400-member New Mexico Cattle Growers Association. “They do not.”

Tom Paterson, an owner of the Spur Ranch Cattle Co. in Catron County and eastern Arizona, said he has faced “terrible problems” since the wolf reintroduction.

The U.S. Department of Agriculture’s Wildlife Services program has a compensation program for “probable” or “confirmed” wolf kills, but Cowan said she believes it is inadequate and inequitable. Compensation varies and depends on how the loss is classified. With a probable loss, the rancher receives half of the animal’s market value that day. A rancher gets full market value only for a confirmed loss, Cowan said.

The government formula does not take into account fattening time, genetic values of future production and the time needed to manage cattle away from wolves, she said.

A 3-year-old bull, for example, might have a value of $3,500 and has five to eight years of procreation production, Cowan said.

“They have lost that $3,500 and all the calves expected to be sired by the bull in the coming years,” she said.

Fish and Wildlife spokesman John Bradley said in a statement that the agency understands “the difficulty that livestock producers face as they raise their cattle. One can only guess on how many calves a bull could potentially sire.”

Since Jan. 3, Paterson said, four of his cows have been confirmed as killed by wolves, and one bull was a probable kill. Any compensation, he says, does not cover the losses and requires waiting.

Occasionally, Bradley said, the Fish and Wildlife Service may “lethally remove” an animal preying on livestock. That happened in 2017, when a female wolf in a group known as the Diamond Pack was killed after the pack was linked to eight livestock deaths.

Still, tensions bubble as wolf proponents consider the future of Thiessen’s livestock grazing permit, a document issued by the U.S. Forest Service that allows animals to graze on federal lands at a far lower cost than on private property. According to a Forest Service spokeswoman, a permit may be suspended or canceled by the district ranger for “failure to comply with federal laws or regulations.”

“The public should not subsidize Mr. Thiessen’s private business after his brutal, violent and unconscionable crime,” the letter states.

Thiessen said he had not heard of the letter seeking his permit revocation.

The Forest Service is reviewing the case to make a determination, and Thiessen has the right to appeal, Mendonca said in a phone interview Friday. Thiessen has had a grazing permit in the Quemado Ranger District “for a number of years,” and the standard permit length is 10 years, Mendonca said.

The agency has received over 200 calls and about 1,000 emails calling for Thiessen’s permit to be revoked, Mendonca said, adding he “appreciated that folks reached out and let us know how they think.”

There is no time frame on when a decision will be made, he said.

The statistics on Mexican gray wolf deaths in the recovery area tell a story.

From 1998, when the first Mexican wolves were released into the wild in New Mexico and Arizona, until December 2015, 66 wolves died from “illegal mortality,” which might include illegal shooting with a firearm or arrow, or deaths related to trapping. Fifteen wolves succumbed to vehicle collision, 23 died from natural causes and 20 died from other or unknown causes, with six awaiting necropsy. The total number of deaths — not including management-related permanent removals or lethal control — for the 17-year period was 124.

The Fish and Wildlife Service considers the recovery program a success, according to a spokesman. Once common from central Mexico to the American Southwest, the subspecies had nearly become extinct by the 1970s. According to the agency’s most recent census, there are about 117 Mexican gray wolves in the wild, with about half living in the Gila National Forest.

According to Fish and Wildlife’s revised recovery plan for the species, released in 2017, removal of the Mexican gray wolf from the endangered species list would require one of two things: The U.S. population of the wolf would need to average “greater than or equal to 320” over four years, or at least 150 wolves would need to be identified in both the U.S. and Mexico over the same four-year period, with annual population growth.

The wolf pup mp1385 was actually fairly well-known before his death. He was born in the wild in 2014 and weighed 25 pounds Sept. 7 of that year when he was captured in a foothold trap — a routine capture by Fish and Wildlife’s wolf recovery team. At that time, he was radio-collared, vaccinated and released in good health, moving away without any limp, according to a wolf capture data sheet.

Five months later, on Feb. 17, 2015, the pup was found dead by the Mexican Wolf Inter-Agency Field Team, which is responsible for the day-to-day management of the wolves in New Mexico and Arizona. The wolf was part of a pack that roamed in the north-central part of the Gila National Forest.

That group had no confirmed livestock killings, Fish and Wildlife said…(CONTINUED)