“Many thanks to the Fleet of Angels for saving the hundreds of of former wild horses, last year, that were subject to the abuse of outright neglect while donors were duped both before and even after the cruelty was brought forward.  It hurts to see the wild ones continue to suffer after initially losing their families and freedom under the cruel hand of the BLM.” ~ R.T. 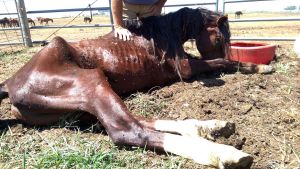 Emaciated former wild horse in a pen at the International Society for the Protection of Wild Horses Burros near Landry, S.D. (Colleen Burns 2016)

A man who formerly bailed out a failing wild-horse sanctuary in South Dakota by purchasing its ranch has since sold the ranch and filed a lawsuit seeking nearly $135,000 in delinquent rent.

John Christopher Fine, of Gettysburg, Penn., filed a lawsuit Aug. 29 in Dewey County, S.D., against Karen Sussman and the nonprofit International Society for the Protection of Mustangs and Burros. Sussman is the society’s president.

Last year, the society surrendered all but 20 of its 810 horses in a deal with state and local authorities. The deal was struck after a whistleblower revealed descriptions, images and videos of horses that were dead, dying or injured from starvation and neglect on the society’s small and overgrazed ranch between Dupree and Lantry in north-central South Dakota.

During the years prior to those revelations, Fine had been so supportive of the society that he bought the ranch from Sussman for $300,000 in 2013 and leased it back to her and the society, so the sale proceeds could be applied toward the society’s debt.

On Thursday, Fine said he was surprised in 2016 when he learned about the conditions on the ranch.

“It’s very sad,” Fine said. “All of that has been very dismaying to me.”

Fine’s lawsuit initially sought to expel Sussman from the ranch, to recover a nearly $13,000 insurance check for storm damage to a ranch building, and to collect $134,468.12 in allegedly delinquent rent.

Sussman vacated the ranch after the lawsuit was filed, Fine said, and court documents show he has since amended his lawsuit to include only the demand for delinquent rent.

Fine has also sold the ranch, which includes a double-wide mobile home and numerous outbuildings on a total of approximately 660 acres straddling the Dewey and Ziebach county line. Public deeds on file in the two county courthouses indicate that the ranch was sold in August to a Dupree couple for about $595,000. It had been listed by a realtor for $775,000.

Sussman did not return messages from the Rapid City Journal, and the whereabouts of her and the society’s small group of horses is publicly unknown.

The hundreds of horses that were removed from the society last year were transferred to a Colorado-based nonprofit, Fleet of Angels, which led an effort to find adoptive homes. That nationwide effort concluded in January, according to Fleet of Angels founder Elaine Nash, who wrote on Facebook that all 907 of the horses (including colts born since the herd was impounded by authorities in 2016) had been placed with new owners.

For its leadership of the adoption effort, Fleet of Angels was awarded the 2017 Equine Welfare Award by the American Society for the Prevention of Cruelty to Animals.