By BEN LEFEBVRE as published on Politico

“Are we jumping from one MeatHead to another?” ~ R.T.

President Donald Trump will nominate David Bernhardt to be the new Interior secretary. 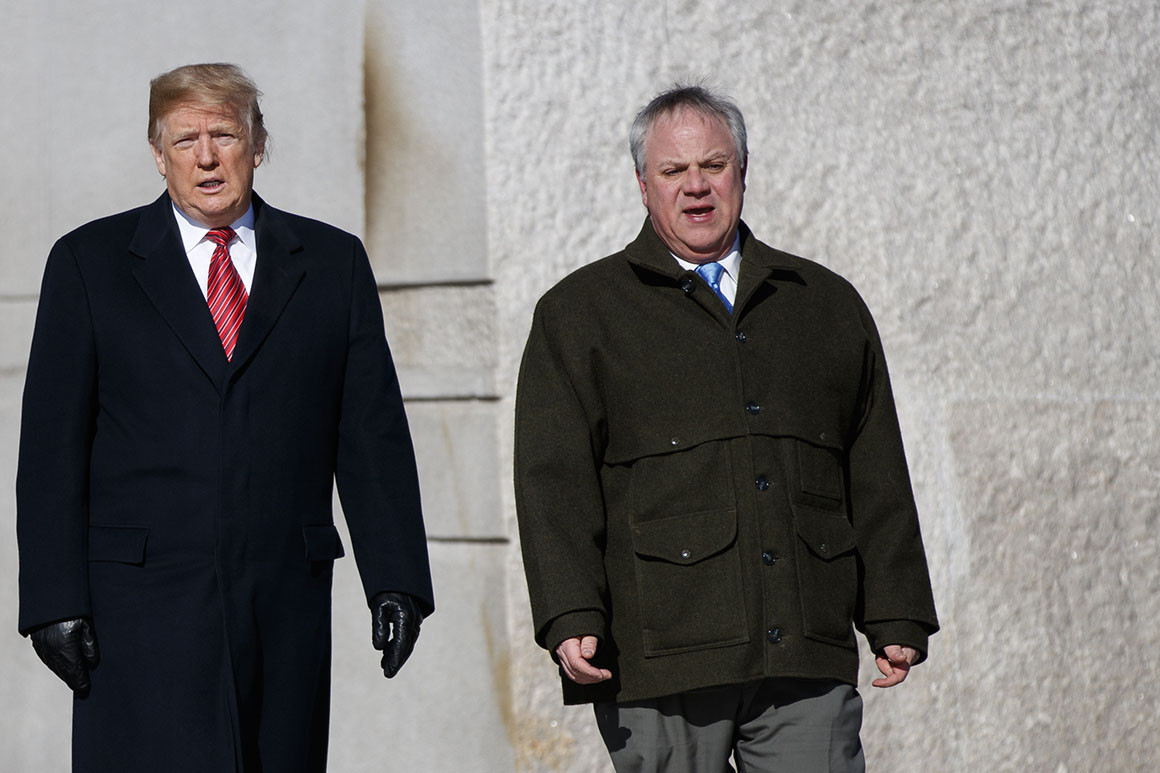 The announcement in a tweet from the president Monday ends a nearly two-month-long search for a permanent replacement for Ryan Zinke, who in early December announced his resignation amid multiple scandals and ethics investigations. Bernhardt, who was confirmed as Zinke’s deputy in July 2017, has been acting Interior chief since the beginning of the year.

“David has done a fantastic job from the day he arrived, and we look forward to having his nomination officially confirmed!” Trump tweeted.

Bernhardt welcomed the nomination in a tweet of his own.

“It’s a humbling privilege to be nominated to lead a Department whose mission I love, to accomplish the balanced, common sense vision of our President,” Bernhardt wrote.

The Interior Department oversees a fifth of the U.S. landmass but has been hollowed out amid a lack of permanent leadership staff, critics have said.

Nine of Interior’s 17 political positions are empty, according to a list compiled by Public Employees for Environmental Responsibility, an environmental group made up of government employees.

“There’s no secretary, no assistant secretary, no director of the parks service,” PEER Executive Director Jeff Ruch said. “Even the rollback machinery is grinding to a halt. It’s like The Wizard of Oz, but the levers don’t lead to anything.”

“He’s done an excellent job setting and implementing policy the last year and a half, so it will be a seamless transition,” Kathleen Sgamma, president of Western Energy Alliance, said in a statement. “As with EPA, the environmental groups forced the original cabinet secretaries out only to have the even more capable policy people who know the agencies in depth take over.”

Bernhardt, a former lobbyist for oil, coal and water interests before joining the Trump administration, will face criticism from Democratic senators and environmentalists over potential conflicts of interest stemming from past clients, sources said.

While at lobbying firm Brownstein Hyatt Farber Schreck, Bernhardt represented Freeport LNG, oil and natural gas producers Cobalt International Energy and Samson Energy, and California water distributor Westlands Water District, among other companies, according to lobbying filings. Bernhardt was also the longtime lobbyist for a powerful California irrigation district that has fought endangered species protections. Just days after his recusal expired this summer, he began work on a controversial plan to roll back environmental protections and send more water to Central Valley farmers, including those in the Westlands Water District.

Even some Bernhardt allies were wary of a messy confirmation fight before Trump announced the nomination.

“The Senate confirmation would be butt ugly,” one pro-Bernhardt lobbyist said last month.

“Bernhardt got this nomination as a reward for months of work cramming America’s natural heritage into a wood chipper,” Kieran Suckling, executive director of the Center for Biological Diversity, said in a statement. “He’s already done more damage to our environment than anyone else in Interior Department history. Confirming him as Interior secretary would be a boon to polluters and a colossal disaster for our public lands and endangered species.”