An open letter from Charlotte Roe

The BLM’s latest acting Director, William Pendley, now argues that wild horses post an “existential threat” in that the “havoc and destruction” they cause is the “biggest challenge” facing public lands. 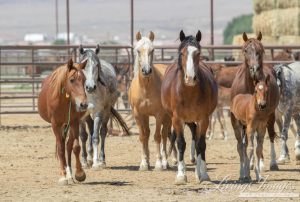 Mr. Pendley’s bizarrely dishonest proclamation — he has long advocated for selling off federal public lands — aims to build political support for BLM’s new management plan.  That plan would take herds down to extinction levels over 10 years — a slow equicide.  It would accelerate BLM’s abusive roundups and open the door to brutal sterilization of wild mares and to create zoo-like herds.  The BLM’s Advisory Board meeting in Washington DC on October 28-31 will seek endorsement of these policies; its members will no doubt be lobbying Congressional appropriators to ensure funding for this “extinction agenda”.

Without scrutiny or debate, the House and Senate Appropriations committees approved funding — $6 million and 35 million, respectively — for the plan.  The Senate version must go to a full floor vote.  Then a House-Senate conference will need to work out differences.  Instead, the Congress may look to a Continuing Resolution to extend FY 2019 spending into the next fiscal year.  That would buy time, but there’s no counting on it.
***Now’s a good time to reach out to your Senators to urge: a prohibition on inhumane sterilization; a freeze on BLM funding; and hearings on the agency’s Wild Horse & Burro program to explore alternatives to its broken management system.
***If you won’t be attending the Advisory Board meeting, public comments are due tomorrow, Oct. 18.  The Animal Welfare Institute’s alert provides a link to submit a quick version you can tailor:
https://awionline.org/compassion-index#/305
***Finally, the Cloud Foundation and American Wild Horse Campaign are circulating a letter to share with your veterinarian in a signature drive opposing the archaic wild mare sterilization procedure to which the BLM is committed.  Please let me know pronto if you can help this effort, and can’t access the info from their websites.
For the wild ones,
Charlotte
P.S.  Here’s more background on the BLM’s new management plan, & why it’s so deadly and cockeyed:
https://www.thecloudfoundation.org/current-events/2019/5/16/racing-to-extinction-new-management-plan-will-devastate-our-wild-herds
https://americanwildhorsecampaign.org/media/qa-dangerous-plan-wild-horses-burros?fbclid=IwAR1R1pmFUJ0Dqrj65ckKeSftsv83_uXwk-YlraIF1VOcaY2NqZOX60P7JYI

In case you hadn’t seen it, Erik Molvar, Ex. Dir. of Western Watersheds, had this to say about Pendley’s rant about wild horses vs. the real threats to public lands:
https://thehill.com/opinion/energy-environment/465538-trump-administration-calls-wild-horses-biggest-threat-to-public