Press Release from The Cloud Foundation 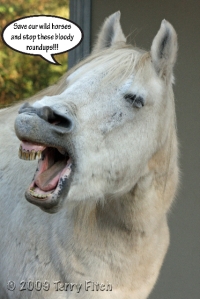 WASHINGTON (June 17, 2011) – The Cloud Foundation is planning a series of nationwide protests against the Bureau of Land Management’s (BLM)’s decision to wipe-out two wild horse herds in southern Wyoming—using dangerous experimental sterilizations in the field. The Foundation opposes The Salalzar Initiative which includes sterilizing entire wild horse herds on the range. The initiative was introduced in Congress in 2009 and was met with fierce opposition including more than 54 members of Congress opposing the roundups entirely. On June 21st the public will protest outside the BLM statewide hearing meeting at 5:30 PM at the BLM Field Office in Rock Springs, WY.
“American wild horses —the native species that is also protected under the 1971 Wild Horse and Burro Act —must be protected from being brutally sterilized and left on the range to die-out,” states Ginger Kathrens, Executive Director of The Cloud Foundation. “Americans across the nation will be protesting the government agency’s heinous decision to manage wild horses to extinction.”
Wyoming is a hotbed state for the extractive industry including oil and natural gas. Public lands are facing a historic threat of industrialization which will destroy the West forever.
Additional protests are being planned in California and other states. Check the Foundation website for updates.