Wild Horse Babies Killed by BLM at Triple B Roundup

At the roundup we had runners go off with no explanation. We had a baby come in that I could see was injured.

So I added an extra two hours of driving to my day and headed to holding.

There I saw three youngsters treated for injury. I do not know how many were treated prior to my arrival. (note: it is interesting that I asked about the injuries and am only given information on the treatment I actually saw, with no other information offered. It always seems like “If they don’t see it, it didn’t happen”). 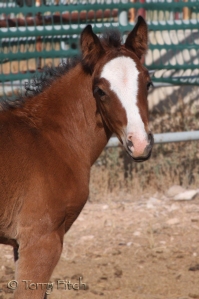 A big bay stud and his band have really hit me hard. He was in the last group (or at least the last group I knew of). One of his foals (the only one that came in with his band) was injured. They put his mare and injured foal in the pen next to him. He kept all the other horses from the fence line. He called to them non-stop while I was there. He was there at the fence line when I arrived in the morning. I was pretty upset by some comments Alan Shepherd made so I got a few quick takes and did not get one of his calls as they began to load that am.

I quickly headed to the roundup site instead as the day before they had already captured 40 horses before my arrival. Leaving holding early didn’t change anything, they still had about 40 prior to my arrival on Day 4. Keep in mind we leave our “meeting” spot at 4:30 am, that’s how much driving is involved.

The comments from Shepherd that were so distressing go like this:  ”The palomino foal had weak tendons. The little chestnut has a bad mom. The other foal that was treated has a laceration to a leg, but it’s pre-existing. The animals drain the water and it needs to be refilled a couple times.”

At the Antelope Complex Roundup this past winter there was the exact same situation with this contractor, Sun-J (it is a pattern). When I pointed out the deficiency Ben Noyes, the WH&B specialist in Ely, simply grabbed more tubs for water and placed them in the pens. He directed the contractor to appropriately distribute feed. He made no excuse.

Perhaps a man like Ben Noyes, that is able to admit a deficit and comprehends that the equation for the amount of horses translates into water consumption, should be the state lead and Mr. Shepherd should go muck at the Burns Corral until he comprehends what horses are?

I was told the runners went out to get the two injured foals. We already know that is also not the truth.

This IS foaling season. ALL foals have weak legs, that is why you don’t run a foal. It IS over 90 degrees during the day and horses need water. The fact that this conversation has to occur at all with an agency tasked for the last 40 YEARS with the humane treatment and management of our wild herds is OBSCENE.

note: and the more I review my tapes the more I believe that the roan is NOT that little chestnuts mom. The chestnut mare at the trap is most likely his mom. They even look alike. A bay dad and a roan mom will most likely not produce a chestnut baby. That baby was leaning against ANY family member he could because he could NOT stand. I’ll bet that’s why she was so agitated. I wonder where her baby is? I wonder so much about the ability to actually OBSERVE and not just process inventory in this agency. I need to see that chestnut foal.