“The public is outraged. Protests are being planned as a result of the evidence.” 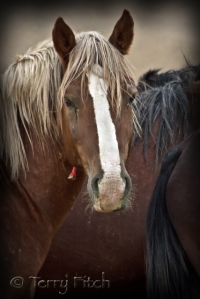 The latest allegations emerge as authorities continue an investigation sparked by a story published late last September which questioned the fate of 1700 wild horses.

That report explored the dealings of Tom Davis, 64, a livestock hauler and proponent of the horse meat industry who has purchased more than 1700 wild horses from the bureau since 2008 – amounting to roughly 70 per cent of all horses sold by the agency.

Late in October, Edwin Roberson, assistant director at the Bureau of Land Management, told KSL Television: ”I can confirm right now that the inspector general of the Department of Interior is investigating, (and) has an ongoing investigation into those allegations.”

No word has emerged yet to satisfactorily explain the fate of the horses bought by Davis for $US10 a head, and wild horse advocates have expressed fears the animals went to slaughter in Mexico.

Now, in what it is calling a citizen investigation, the Wild Horse Freedom Federation has released evidence it says exposes a Bureau of Land Management’s wild horse long-term holding contractor selling wild horses to an alleged “kill buyer”.

It alleges the horses probably went to slaughter.

“This evidence shows that the BLM is not protecting our wild horses and is allowing alleged kill buyers to purchase them,” explains R.T. Fitch, volunteer president of the federation.

“The public wants Congress to enforce the Free Roaming Wild Horse and Burro Act that they unanimously signed into law in 1971. A Congressional Investigation needs to happen now.”

The federation joined with Protect Mustangs to call for a freeze on roundups, access to documents at all holding facilities as needed, as well as an immediate Congressional investigation into the bureau and its contractors allegedly selling America’s iconic wild horses into the slaughter pipeline.

The executive director of Protect Mustangs, Anne Novak, said: “It’s time for a deep investigation – done by an entity outside the BLM – to bust these crimes against the American mustang and champion the public who were deceived by officials in charge of protecting our icons of freedom.

“The public is outraged. Protests are being planned as a result of the evidence.”

Coffey, with the help of Animal’s Angels, researched and released an in-depth article based on her inquiries. Evidence was obtained through South Dakota Brand Board Inspection records and Freedom of Information Act (FOIA) requests.

Coffey continued: “The BLM leads the public to believe that captured wild horses are living out their lives grazing peacefully on long-term holding pastures, and claims they do not sell wild horses to slaughter, but at least one contracted middleman did sell BLM wild horses to an alleged kill buyer and the horses very likely met a horrific fate at a slaughterhouse.

“We want a freeze on roundups, immediate access to document all long-term holding facilities as needed and a Congressional investigation into all aspects of the BLM’s Wild Horse and Burro Program.”

Coffey’s report, together with links, can be accessed here and here.