“In my most humble opinion” by R.T. Fitch ~ president of Wild Horse Freedom Federation

When Dumb Just Continues to Get Dumber! 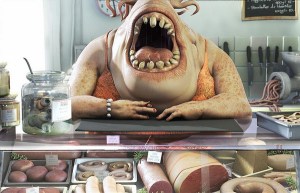 If the sane and compassionate members of our society could have picked a perfect poster child to represent the reprehensible, predatory business of corrupt horse slaughter they couldn’t have chosen a better candidate than the non-degreed, uncredentialed, self-appointed leader of a dozen whacked out horse-eaters…Wyoming State Rep. “Slaughterhouse” Sue Wallis; the broken and scratched record that just keeps on ticking right on into the twilight zone.

Years worth of failed endeavors, empty promises, distorted truths and made up facts the woman continues to spout vile garbage even when backed up against the wall with no way out.  Born to bring drug tainted, bloody horse meat into the school system and prisons of Wyoming “Slaughterhouse” refuses to crawl back under her rock in Recluse, Wyoming and continues to foul the air and corrupt the internet with her perverse and twisted ramblings.

Last year she condoned and applauded a young woman who killed her own horse, crawled into it’s carcass (naked) and then ate it while all the time her boyfriend was snapping bloody photos.  According to the Princess of Evil that was just good clean fun.

Now, she has overstepped the boundaries of decency once more by complimenting the savage ingrate who murdered a horse on Youtube and then profanely threatened every decent citizen in the United States…should this woman not be removed from public office?

Here is the Face of “Pro-Horse Slaughter” Advocates

Yesterday we published a letter that was written to our Secretary of Agriculture, Thomas Vilsack, by a disturbed reader of “Straight from the Horse’s Heart” wherein she/he decried the trashing that $ue Wallis was giving the Secretary and also included a horse snuff video that was posted on YouTube by an employee of a New Mexico slaughterhouse that wants to be the first to butcher companion horses since 2007.  The letter was copied to Wallis, the Secretary, Wallis’ main squeeze and partner in blood Dave “Doink” Duquette and others.  The note would have caused a normal human to move to South American and disappear off the map but what did sweet blood thirsty Susie do; she friggen replied and even applauded the snuffing out of the innocent young horse…get the straight jacket boys, this one ain’t right.

Buckle up your seat belts and grab a bucket to upchuck into because here she is in her self-indulgent and deluded glory, we present the scourge of humanity, “Slaughterhouse” Sue Wallis: 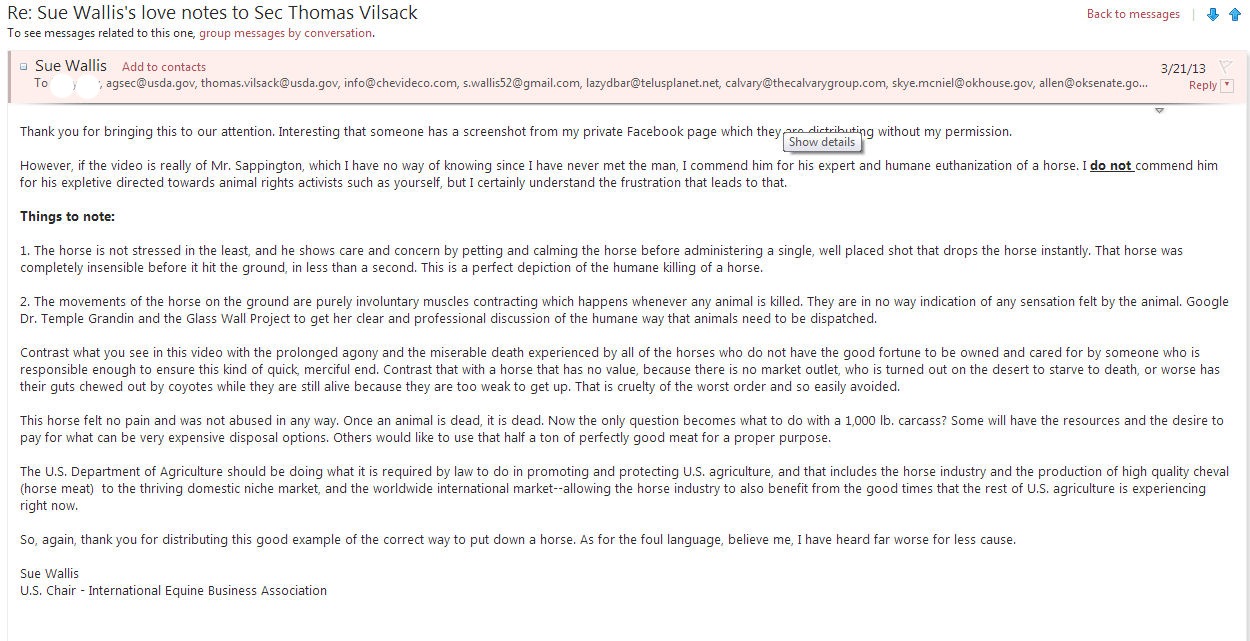 And if that is not enough, she has duped the decent ranchers of Oklahoma into thinking that those who don’t want to eat their best friends are some sort of eco-terrorists that want to take away their property rights.

Falsehoods, virtual terrorism are the tools of her trade and it is high time that the good folks of Wyoming wake up to what a bane and blight this unsightly scab is on the image of their state; she has to go and when she does she can take “Doink” with her.  They can keep each other company in that subterranean vault where the flames never die.

Maybe they can even roast a teeny weenie together…