Market for Slaughter Horses Plunging in Wake of “Burger-gate”

EWA (Chicago) – USDA data for the first quarter of 2013 indicates a precipitous drop in the number of horses going from the US to Mexico for slaughter. The flow of horses south had been increasing steadily for over two years but dropped 62% between the first full week of 2013 and the end of the first quarter. 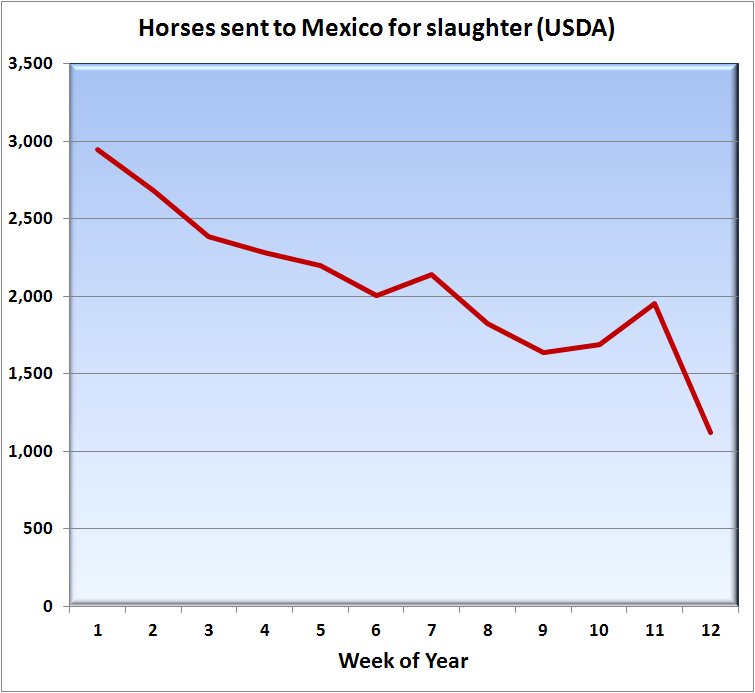 Since the closing of the US based horse slaughter plants in 2007, US horses have been going to slaughter in Canada and Mexico for consumption in the European Union (EU) and Russia. Beginning in late January of this year horse meat began to be detected masquerading as beef in countless products across Europe and much of the world. The resulting scandal was dubbed “Burger-gate” for the fact that horse meat was first detected in Burger King “all beef patties” in England.

“We have been watching these numbers closely,” explains EWA president John Holland, “because we knew they would tell us how much of the meat from our horses was being sold as beef. The answer is apparently a great deal of it.”

The EU scandal also explained another mystery. The available data indicated that the consumption of horse meat in EU countries was flat to down over the past decade, but the export of US horses kept climbing.

The sales of processed beef products have dropped in the EU in the wake of the comingling scandal, but the consumers of horse meat in the EU were unlikely to change their buying patterns since they were intentionally consuming it all along. Therefore, Holland reasons, “Any drop in horse meat sales is most likely attributable to its no longer being sold as beef.”

The current trend does not bode well for fledgling companies trying to bring slaughter back to the US since they will be competing with multinational conglomerates in what appears to be a rapidly shrinking market.

Data on the export of horses to Canada for slaughter will not be available for 60 days, but reports in the Canadian media indicate an even more severe drop in the number of US horses being slaughtered in Canada.

The export of horses to Canadian slaughter had already been on the decline in 2012 when it dropped by 7.5%, but this was more than offset by a 61% increase in horses going to Mexico. The reason for this shift to Mexico is thought by some to be attributable to the fact that Mexico does not test for phenylbutazone contamination, an issue that has plagued Canadian slaughter plants.