Wild Horse Chaos, Thanks to Obama

Source: By Andrew Cohen as published on Esquire

“Babies of weaning age — maybe three months old — were pulled from their mothers and immediately herded into the auction ring, one by one, crying and looking for their mothers as they were sold to the highest bidder…” 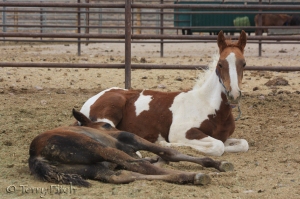 It’s hard to believe or describe what just happened to hundreds of horses who were, until last week, roaming free in northern Nevada. Unwanted by members of a Native American tribe living near them, quietly delivered up by federal agents who wanted to make room for grazing livestock, unprotected by Obama Administration which says it is opposed to slaughter even as it enables it, the horses, more than 460 of them, were rounded up and shipped late last week to a public auction known for attracting “kill buyers” looking to fill slaughter plants in Canada and Mexico.

I’m told that approximately 149 horses — unbranded and thus likely to be wild horses protected by federal law — were spared from slaughter on Saturday thanks to wild horse advocates, public interest lawyers, and a federal judge who late Friday night issued a restraining order because of the “serious questions” she had about the way the roundup was conceived and executed. But approximately 316 other horses, branded and thus considered private property, found on federal or tribal lands or otherwise brought to auction by their legitimate owners, were sold at a public sale Saturday in Fallon, Nevada.

As Congress contemplates two measures that would again ban such slaughter around the nation, and as officials in New Mexico and Iowa grapple with the controversial return of slaughterhouses to their jurisdictions, many of the horses sold Saturday, perhaps as many as 200 according to witnesses at the sale, will be killed for meat — or already have been. From a wild horse advocate, here’s one account of what happened Saturday at the Fallon sale:

“Babies of weaning age — maybe three months old — were pulled from their mothers and immediately herded into the auction ring, one by one, crying and looking for their mothers as they were sold to the highest bidder. Then their mothers followed, pushed into the ring in groups of 5-6 horses, huddled together, terrified and auctioned in lots and purchased by a kill buyer. It was brutal.”

The story of what happened to these horses is part of a broader story of the Obama Administration’s deliberate indifference to the nation’s wild herds and to the federal laws and policies designed both to protect and manage them. It is also a story that highlights the uneasy contradictions in the administration’s policy toward horse slaughter. Administration officials — like Agricultural Department Secretary Tom Vilsack, for example — have gone on the record saying they are opposed to slaughter. But it was the USDA’s Forest Service, in ways still not fully explained to the American people, that planned to facilitate the roundup of these horses (both the branded and unbranded ones) on behalf of the Paiute-Shoshone tribe — a roundup destined (as it did) to lead to slaughter for many of the horses.

There is no law in America today that says a person can’t sell his horse to slaughter. Members of the tribe had a right to collect and sell their own horses. But many serious questions remain about what happened last week, most notably these two: How did it come to pass that hundreds of horses were rounded up and shipped off for sale in the days immediately following a public announcement by the Forest Service that it was postponing that very roundup? And why, a week later, has the Forest Service still failed or refused to explain precisely what happened to cause these horses to be rounded up before officials satisfied their reporting requirements under federal law?

Had the advocates not intervened, and the judge not ruled, wild horses almost certainly would have been slaughtered in violation of federal law and policy. Moreover, if this episode represents a policy shift for the administration — if it is now the policy of the United States to actively help private parties sell their horses to slaughter — the American people surely deserve to have a fuller opportunity to debate the wisdom of that policy. On Friday, as the story drew attention in court and in the field, and as the emergency injunction filed by horse advocates was being evaluated by a federal judge, two of the three federal spokespeople responsible for keeping us all abreast of wild horse developments were gone for the weekend. A third told me via email that “it is Forest Service policy to defer to DOJ for comment on matters under litigation.”…CONTINUED