“…but both the Bureau of Land Management and the United States Forest Service have PLENTY of time to exploit, harass, roundup, hold and spread rumors and bogus propaganda about a handful of federally protected wild horses and burros on their rightful public land.  Something is WAAAAAYYY out of alignment and skewed totally to benefit federally subsidized welfare ranchers…the “Good Ole Boy Club” smells more like rotting fish than simple cow poop!” ~ R.T.

“The report also highlights the extent to which public lands livestock grazing is heavily subsidized by American taxpayers.” 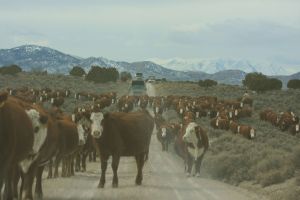 The Government Accountability Office (GAO) released a report last week detailing the extent to which the United States Forest Service (USFS) and the Bureau of Land Management (BLM) have failed to follow agency regulations in documenting and penalizing unauthorized or trespass livestock grazing on federal public lands. The report, entitled Unauthorized Grazing: Actions Needed to Improve Tracking and Deterrence Efforts, was requested by Rep. Raul Grijalva (D-AZ), Ranking Member of the House Natural Resources Committee. The request came in response to several high profile cases of trespass grazing and a recognition of the devastating ecological impacts it can have on wildlife habitat.

The report came to several important conclusions. Trespass grazing is pervasive and causes widespread degradation of public lands, agencies do not document it adequately, and the Forest Service trespass fees are too low to be a deterrent.

The report also highlights the extent to which public lands livestock grazing is heavily subsidized by American taxpayers.  In 2016, BLM and the Forest Service charged ranchers $2.11 per animal unit month for horses and cattle, and $0.42 for sheep and goats. But, average private grazing land lease rates in western states ranged from $9 to $39.

In a separate press release, Grijalva stated, “We know we’re leasing public land at well below market value. What we don’t know nearly enough about is the extent or impact of unauthorized grazing on public lands. The Forest Service and Bureau of Land Management need to bring grazing fees in line with the modern economy and take illegal use of public lands more seriously going forward.”

The report also acknowledges the significant ecological damage that trespass grazing can cause. The report states, “(U)nauthorized grazing may create various effects, such as severely degrading rangelands under certain conditions.” This damage was witnessed firsthand by the GAO investigators. “During our field visits, we observed locations where unauthorized grazing had resulted in severely damaged natural springs, overgrazed meadows, and trampled streambeds.”

“Western Watershed Project (WWP) has been documenting these types of abuse for years. Our reports often fall on deaf ears or are purposefully ignored by agency land managers who refuse to follow the law and punish or even document illegal grazing on public lands,” said Jonathan Ratner, the groups Wyoming Director.

Because the agencies rarely track and report on unauthorized grazing, the GAO concluded that the frequency and extent of unauthorized grazing on agency lands are largely unknown. The report found that rather than report and penalize unauthorized grazing as required by agency regulation, agency personnel are far more likely to handle incidents informally with no subsequent documentation. This leads to both a lack of institutional knowledge and makes identifying and prosecuting serial violators much more difficult.

“Trespass grazing occurs far more often than the agencies are willing to admit. We often find cows grazing inside exclosures, in the wrong pastures, or long after the permitted season of use. In fact, this is more the norm than the exception,” said Josh Osher, WWP’s Montana Director.

Even when trespass grazing is reported and the agencies take action, the GAO found that the penalties assessed are often too low to act as a deterrent.  This is especially true for the Forest Service where the penalty for trespass grazing may be even less the cost of permitted grazing elsewhere.  The report points out that agency field staff stated, “that penalties for unauthorized grazing are rarely or never an effective deterrent … some told us that there are permittees who view the penalties for unauthorized grazing as a cost of doing business because paying the penalties is cheaper than seeking forage elsewhere.”

A previous GAO report on trespass grazing in 1990 reached similar conclusions, including “when offenders were detected, BLM frequently exacted no penalties and, for the more serious violations, seldom assessed the minimum penalties its own regulations required. As a result, unauthorized grazing was not adequately deterred, which could lead to degradation of public rangelands, among other things.”  At that time, GAO made recommendations to the BLM including that all incidents of unauthorized grazing be documented and that compliance inspections be expanded to “provide systematic compliance coverage.”  Unfortunately, these recommendations were largely ignored by the agency.

“A culture of willful ignorance is pervasive within the BLM and Forest Service. The agencies rarely inspect grazing allotments and even when violations are found, corrective actions are rarely taken and violators are rarely punished,” said WWP’s Idaho Director Ken Cole.

In this latest report, the GAO makes similar recommendations to the agencies about identification, documentation, and deterrence of trespass grazing. While the BLM and Forest Service generally agree with the conclusions of the report and claim they will make changes to agency policy, based on past experience, WWP is not confident that changes will occur or that local field managers will change current practices.