“Something to TRULY warm our hearts this holiday season.  The horses may FINALLY have a chance and it is about FLIPPING TIME!  Thank you Elaine and all the folks who have selflessly worked behind the scenes.  You are all angels and we love you for all that you do.” ~ R.T. 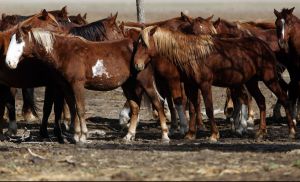 A state board took the first step Thursday toward permanently removing hundreds of wild horses from a troubled north-central South Dakota sanctuary and finding new homes for them.

Members of the South Dakota Animal Industry Board met by teleconference and authorized their attorney to seek a court order. The order would transfer horses owned by the nonprofit International Society for the Protection of Mustangs and Burros to the ownership of another suitable caretaker.

The horses have been temporarily impounded — but are still under the society’s ownership — since October at the society’s small and overgrazed ranch near Lantry, about 150 miles northeast of Rapid City. Authorities in Dewey and Ziebach counties, which share a border that is straddled by the ranch, have been caring for the horses at the expense of the counties’ taxpayers.

The impounding was motivated by a public complaint, which led to a state-employed veterinarian’s finding that the horses were suffering from neglect. In addition, a former society employee publicly alleged that some horses were dying of starvation-related causes.

There were 810 horses at the ranch when the impounding began. That number has since dwindled to around 540 through adoptions or sales arranged between private parties and the society, Dewey County State’s Attorney Steve Aberle said Thursday in a Journal phone interview.

Terms of the impounding agreement allowed authorities to cap private adoptions and sales at 270 horses, because county officials wanted some horses to remain as collateral against the costs of the impounding. Some of those costs have been reimbursed by the society and by public donations and grants, but Aberle said that an estimated $75,000 remains outstanding, mostly from hay purchases.

Reimbursement for those remaining costs could be negotiated as part of a transfer of ownership, Aberle said. There is a consortium of concerned groups that had proposed a deal to take ownership of the horses, find adoptive homes for them and reimburse the counties, but Aberle said the society did not respond to that proposal.

The same deal with the same consortium, or a somewhat similar deal, could be sought in the proposed court order for transfer of ownership.

“It’s still a possibility,” Aberle said. “It would be up to them and (subject to) court approval.”

Aberle declined to identify the members of the consortium, saying they wish to remain anonymous for now.

Efforts of some groups seeking better homes for the horses have been visible on social media. One such group is Fleet of Angels, a nonprofit network of trailer owners that provides transportation and assistance for at-risk horses in the United States and Canada.

Fleet of Angels founder Elaine Nash said Thursday in a phone interview that her all-volunteer organization has coordinated the adoption effort so far, spending the past two months working through winter weather to gather and send 270 horses to dozens of new owners nationwide.

Screened applicants adopted two to 20 horses apiece. Nash said the new owners of the horses include individuals who hope to train them for riding, rescue organizations that will try to find appropriate homes for them and sanctuaries where the horses might live the rest of their lives.

Nash, who splits her time between New York and Colorado, declined to say whether her organization will have a role in the proposed transfer of ownership, but she said as opposed to the uncertain future the horses were facing, “Things are looking much better for (them) now.”

Aberle said the counties and the Animal Industry Board’s attorney will jointly seek a court order to execute an ownership transfer. A time and date for a hearing on the request is yet to be scheduled. Aberle said the hearing is likely to take place at the Ziebach County Courthouse in Dupree.

Efforts to reach the society’s president, Karen Sussman, via phone and email messages were unsuccessful Thursday.

Authorities had scheduled a public auction of the society’s horses for earlier this week but postponed it indefinitely. Wild-horse advocates had feared that an auction would draw bids from foreign slaughter plants. The horses are either all rescues or descended from rescues.

State Veterinarian Dustin Oedekoven said Thursday in a phone interview that transfers of ownership have been pursued in other impounding situations, but he called the transfer of such a large number of animals “unique.”

“We always prefer to work with the owner to have them be responsible for providing for the care of their animals and managing them in a responsible way,” Oedekoven said. “Short of that, a sale or transfer of ownership has been done in the past in order to care for the animals properly.”