What happens to NC’s wild horses when a major hurricane like Florence hits? 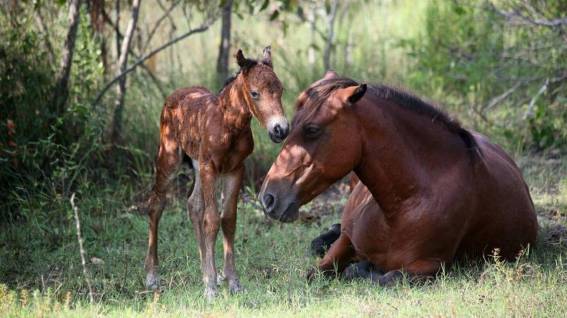 A filly was born to North Carolina’s wild horse herd in Corolla on Thursday, Aug. 23, 2018. She’s pictured here with her mother.   Cathy Forgnone

North Carolina coastal residents are evacuating or battening down ahead of Hurricane Florence — at least the human ones.

The wild horses that make their homes on the coast of the Tar Heel state are staying put, and they might be better prepared to outlast a storm than anyone.

Hurricane Florence is a category 4 storm as of Monday evening — 400 miles wide and still gaining strength and speed as it bears down on the Carolinas coast.

North Carolina’s wild horse herd has seen its share of storms, though. They’ve been around for 500 years, after all, the Corolla Wild Horse Fund (CWHF) said on Facebook Monday.

Currituck County, where the herd lives, ordered a mandatory evacuation of the Outer Banks communities, Corolla and Carova, beginning at 7 a.m. Tuesday.

Neighboring Dare County — where much of the staff that looks after the herd lives — and other coastal counties along the coast issued evacuation orders for all residents and tourists.

“The horses have lived on this barrier island for 500 years, and they are well equipped to deal with rough weather,” the CWHF said on Facebook Monday. “They know where to go to stay high and dry and are probably in better shape right now than most of us humans who are scrambling with final preparations. “

“Anything we might do in the hopes of ‘protecting’ them would probably end up being more dangerous and stressful for them than the storm,” the CWHF said.

Florence could bring storm surge flooding to the Outer Banks reaching 8 to 15 feet or higher, according to the National Hurricane Center.

There are 18 rescued horses at a farm the CWHF cares for, and staff is “making sure they are ready to ride the storm out safely. They have shelter, but also the option to stay outside.   Read the rest of this article HERE.