“He has decided he is now a mighty mustang.”

In a herd of wild horses, it’s the lead stallion who often drops behind the herd as they’re running, helping to guide his group safely to food and water.

And so, whenever Clare Staples, founder of Skydog Ranch, a sanctuary in Oregon, sees Cassidy drop behind the herd of rescued wild horses, she can’t help but laugh.

At just 39 inches tall, Cassidy (who is named after singer David Cassidy) is far from being a wild mustang.

Cassidy is actually a miniature mule, or “mini hinny,” a mix between a mini horse and mini donkey. And even though he was saved at the last minute from a miserable place, and is several feet shorter than the horses with whom he’s bonded, that doesn’t stop him from thinking quite highly of himself.

“We tried to put him with the donkey herd several times,” Staples told The Dodo, “and he just goes under the fence and back to his wild mustang herd.”

Cassidy was saved with a mustang from a kill pen in Waco, Texas, back in 2016. Kill pens are where unwanted horses, donkeys and mules are sent when no one wants them anymore; if they aren’t saved from these places, they’re sent to slaughter in Canada or Mexico.

“I know we are a mustang sanctuary,” Staples wrote on Skydog’s Facebook page just after seeing Cassidy’s photo and deciding to rescue him, “but sometimes when you are rescuing a mustang a little creature manages to win your heart … Cutest little boy just couldn’t be left behind.”

Cassidy’s life was saved — but his life at the sanctuary was going to be a little different from what Staples had imagined. Every single attempt that was made to introduce him to other donkeys failed.

“The moment he arrived he didn’t want to hang out with donkeys but full-size horses,” Staples said. And the horses seemed pretty curious about the mini hinny as soon as he arrived, too. The first horse he met when he arrived at the Malibu branch of the sanctuary was Buddy. “[Buddy was] trying to say hello as he arrived,” Staples said.

Cassidy has flourished at the sanctuary, on his own terms. “He has decided he is now a mighty mustang and lives free at our sanctuary with a herd of wild horses,” Staples said. “He is only 39 inches tall … but thinks he is enormous.”

Cassidy also takes pride in playing a particular role in the social structure of the herd. “If the herd of mustangs are nervous of something or a new horse arrives, it is Cassidy who checks it out and tells the others it’s safe,” Staples said. 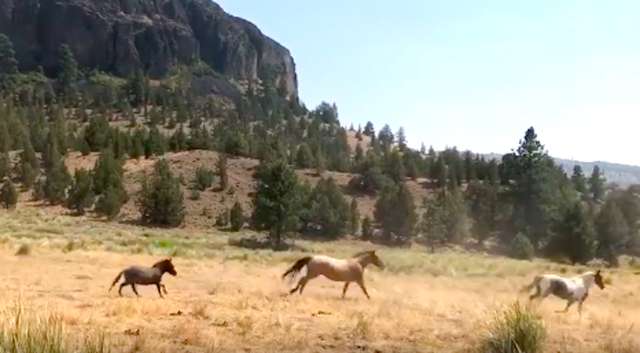 Somehow, despite his little legs, Cassidy manages to keep up with the herd on the 5,000 acres of sanctuary land where they live. “He even has two mares he believes are his,” Staples said. “He just stands next to them and tries to act like they are his girlfriends.”

But even Cassidy sometimes feels like hanging out with someone his own size — so he socializes with Barkley, the Great Dane.

“From a kill pen to where he is now is a huge leap for a tiny fellow,” Staples reflected.