Thanks to everyone who requested an update on the story we posted regarding our German Shepherd son’s full hip replacement surgery, it’s an easy request to fulfill; he is doing “FANFRIGGINTASTIC”. 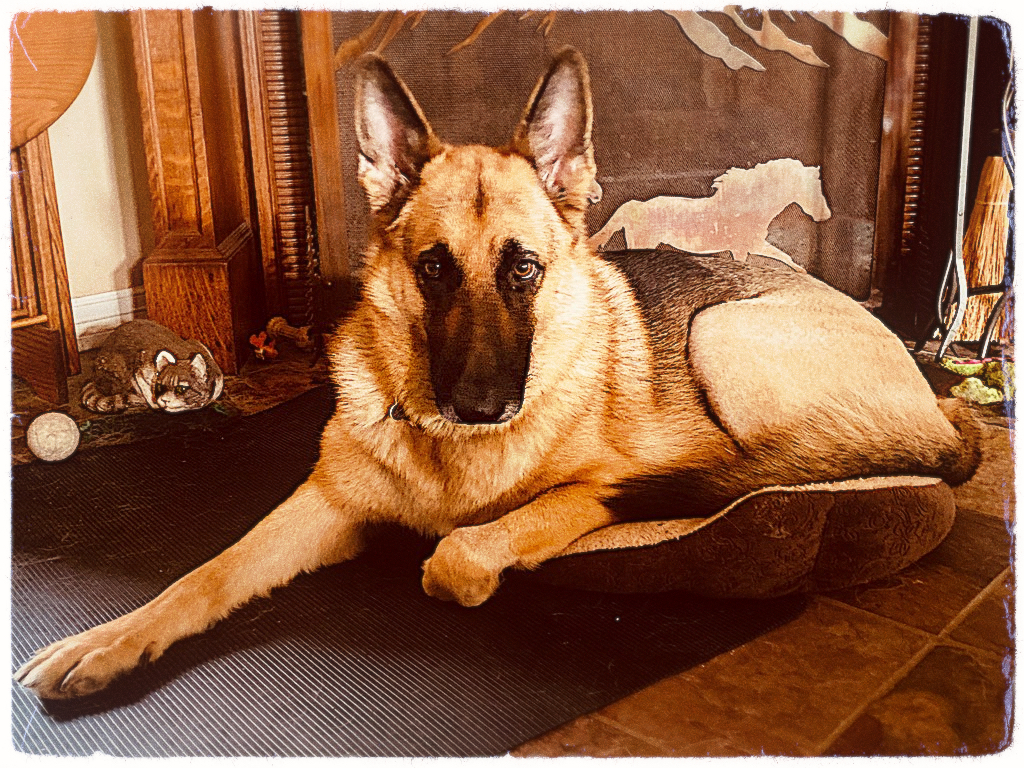 Now, granted, I can’t say that firsthand as the day after we picked him up Terry informed me that I should head back up the road to work as my presence was complicating the issue.  Instead of resting he would get antsy when myself and his canine sister would go out to tend to the horses or other farm like chores, he wanted to go along.  So, I sadly obliged. 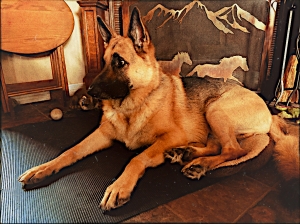 The incision has all but disappeared.

But the morning after we retrieved him, we woke him up, Terry put the leash on him and I stood by at his backside to assist, he got up to go outside without any help and it has been nothing but forward progress ever since.  I felt confident that Terry had everything well in hand.

In fact, he was so good about it all that Terry removed the clown collar the second day as he never looked twice at his stitches and incision, not once.

His favorite toy “Binky” that was given to him by his foster parents and brought home when we adopted him over a year ago. Of course, it has been in the washing machine a time or two, since.

Now we are over two weeks into recovery, his stitches have been removed and the biggest problem Terry has is holding him back, he feels so good he wants off the leash and to run and romp with his sister and play with the horses.  Ain’t happening.  But take this into account, the pain from healing is probably less than the pain he had in walking as neither of his rear legs have ever been properly attached to his pelvis, he was literally a two legged dog balancing on his front legs and now he has this rock solid, stainless steel hip that is giving him this stabile footing that he has never, ever experienced, even though he is only a tripod.  This guy is ready to rock and roll.

Once fully healed and cleared we will have the right hip replaced and Terry just cannot wait to see how he explodes with four grounded paws on the ground AND no pain for the first time in his life.  I have coined the phrase that I believe is quite appropriate, “We are going to have to peel him off from the ceiling.” 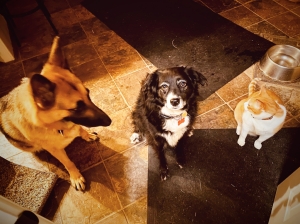 He feels good enough to come to the pantry and beg from mom along with his rescued sister “Roxy” and former feral brother “Tank” the wonder kitty.

On Sunday, it is a perfect time to give thanks for one more small and happy life in the Universe; we are elated that we have been blessed to share our hearts and home with this delightful and loving soul.  It is our hope that we will be allowed to spend many happy years with the four-legged boy who makes everyone his friend upon meeting him.

all photos by Terry Fitch