(The News as We See It) by R.T. Fitch ~ author of “Straight from the Horse’s Heart“ 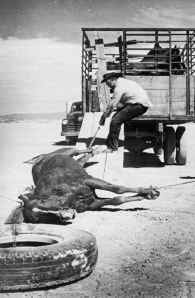 The Helicopter is the BLM's new High Tech Weapon of Extinction

The BLM claims that it is necessary to use helicopters to stampede 2,000 wild horses and 200 wild burros living on the Twin Peaks Herd Management Area in an effort to protect the land they graze on and the horses themselves.  Advocates counter that recent observations indicate that there are nowhere near that number of horses on the range and that private cattle far outnumber the native wild horses.

Wild horse advocates had hoped to stop the roundup with challenges in federal court. Last week the advocate’s challenge was heard by a U.S. District judge in Sacramento who declined to order a halt to the roundup, and today the 9th U.S. Circuit Court of Appeals also declined to stop it.

The roundup is scheduled to begin this morning, Aug 11th, with BLM contractors firing up helicopters which will take to the air and stampede the unsuspecting wild horses into awaiting traps.  The horses families, or bands, will then be broken up and the wild horses will be condemned to a life of long term holding which comes at great cost to the welfare of the equines and the pocket book of the American tax payer.

Advocates, scientists, Congressmen, Senators, scholars and Subject Matter Experts have attempted to educate the BLM special interest machine on the dangers of using helicopters to stampede horses and the risk of conducting such deadly operations in the heat of the desert summer.  Such pleas of sensibility were ignored several weeks ago at the deadly Tuscarora stampede were dozens of horses were killed on the first day of the assault.

54 Congressmen have sent a letter to Secretary of the Department of the Interior, Ken Salazar asking for a moratorium on the wild horse stampedes until a full accounting of horses left on the range and horses held in captivity could be conducted.  Salazar’s response, to date, was a carefully crafted statement issued by the BLM’s director, Bob Abbey, stating that such a moratorium would not be granted.  The statement appears to have been  produced by the BLM’s high dollar, contract public relations firm and served to only further inflame the American public as it was riddled with misquoted figures and full of unsubstantiated facts.