Information supplied by the Cloud Foundation 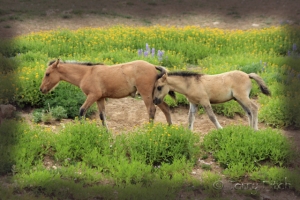 WASHINGTON (July 7, 2011) – U.S. Representative Raúl M. Grijalva (D-AZ) is circulating a letter to his House of Representatives colleagues urging their signature on a letter to Secretary of the Interior Ken Salazar and Bureau of Land Management (BLM) director Bob Abbey regarding their inhumane and costly mismanagement of the Wild Horse and Burro Program. The letter expresses grave concerns to Secretary Salazar and the BLM regarding the creation of non-reproducing herds—especially the extreme danger of spaying wild horse mares.

“We are so appreciative of Representative Grijalva’s efforts to protect our nation’s wild horses from the cruel and invasive procedures BLM is planning,” states Ginger Kathrens, Executive Director of The Cloud Foundation. “Wild horses and burros need congressional intervention fast—otherwise BLM will manage these iconic symbols of freedom to extinction.”

Grijalva’s letter also expresses concerns about BLM’s supervision of America’s wild horses and burros–namely the agency’s failure to conduct accurate censuses on wild horse and burro herds. BLM often over inflates the numbers of wild horses and burros on the range and comes up short during roundups. As a result, nearly all animals in a herd are eliminated from their legally designated ranges. This has led advocacy organizations, such as The Cloud Foundation, to conclude that wild horse populations are far lower than BLM estimates. Also the letter underscores the financial costs—citing the burden placed on American taxpayers due to the agency’s massive and unnecessary roundup and removal practices.

The Cloud Foundation, Equine Welfare Alliance, Wild Horse Freedom Federation and many additional organizations urge the public to contact their U.S. Congressional representative and request they sign onto Grijalva’s letter before it is delivered to Secretary Salazar and Director Abbey.