Article and Information by Animal’s Angels

Kentucky is marketed to would-be tourists as the Horse Capital of the World, the state with “unbridled spirit.” The logo sports a horse galloping through the word ‘Kentucky.’ 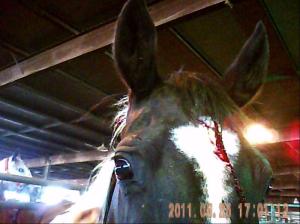 Ironically, Kentucky is among the worst states in terms of animal cruelty laws. Last year’s MSNBC article titled “5 worst states to be an animal: Abuse laws lax”, opens with, “What’s the punishment for being cruel to an animal? In five states – Idaho, Hawaii, Kentucky, Mississippi and North Dakota – the law’s response is, ‘Not much.'”

“Not much” is thoroughly corroborated by AA’s recent investigations in KY.

KY laweven prohibits veterinarians from reporting animal abuse or neglect, pointing to the client’s right of confidentiality, which is completely at odds with the Veterinarian’s oath swearing “…the protection of animal health and welfare, the prevention and relief of animal suffering.”

When the law was passed in 2009, many claimed the outcome was “unintended” and promised it would be corrected in 2011. But the revision bill did not pass this spring (There were in fact, no bills opposed by the Kentucky Farm Bureau that passed during the 2011 legislative session), and the perversion of client confidentiality continues to the detriment of animals.

During June and July, AA spent 14 days on the road and found 14 different horse slaughter-related operations. Many of the 14 were simply chanced upon as investigators rounded a corner to find another grim, manure-filled paddock with 50 or more thin horses, wearing slaughter tags, and semis pulled up to large loading ramps.

Some of What AA Investigators Found

At the Larry Browning property in Butler, KY, AA investigators found approximately 100 horses, many of them very thin to emaciated, lethargic, and coughing. Some were penned in an area used for manure disposal, standing on ground covered with manure and urine, their hay thrown on top of the filth.

It turned out there is a history of complaints against Browning about starving horses on his property. Animals’ Angels obtained photographs taken at the Browning premises on June 15th. , that show extremely emaciated horses with life threatening body scores of 1.5 or less.

However, only a few days after the photos were taken, a KY Department of AG inspector visited the property and reported there was “nothing alarming”, complaints were “unfounded”, there was “adequate quality hay”, and that all horses had a body score of 3.5 and above. No pictures were included in the inspectors report.

AA investigators identified a large 350 horse auction in Smith’s Grove, KY, apparently managed by known kill buyer Tim Ryan. Ryan ordered employees around and was later observed drawing blood for Coggins’ testing, a blatant violation of regulations. Several other kill buyers were present at the auction. Outside, it was 86 degrees with no breeze and almost 100% humidity. Inside was worse with no fans running, lots of dust and no food or water for any animal. Handling was rough as horses were forced through a chute 3 at a time. Kill horses were kept away from the public eye, in pens all the way in the back of the barn. Several of these horses were very thin, one had a gashed, bleeding forehead, an apparent transport injury. Kill horses sold very quickly around midnight after most of the public had left.

At the David Shaw Slaughter Horse Collecting Station in Scottsville, KY, AA investigators found 35 to 40 horses. The pens were extremely run-down and contained lots of trash and debris, and a dilapidated building with its roof caved in. The horses stood on piles of manure with a large pile filling up one corner of the pen. Several of the horses were very thin and kept their heads low. Several were coughing. All had slaughter tags attached to them, ready to be shipped to Canada for slaughter.

The investigation continued at facilities with records of Transport to Slaughter Violations including R & R Livestock in Murray, Ryan’s Horse Company in Rineyville and Wrights Farm in Sturgis. Documents show that many KY horse traders supply some of the biggest kill buyers in other states like Ohio, Minnesota and Louisiana. According to documents Animals’ Angels obtained from the USDA, at least two facilities provide horses to large scale kill buyer Jeron Gold in Michigan.

In Kentucky, it seems those associated with horse slaughter can operate with little to worry about. Laws do nothing to protect animals but offer major protection to those guilty of animal cruelty. The animal cruelty statute in KY is waived if killing an animal by mutilating, beating, failing to provide water and food, etc., is “incident to processing for food or some other commercial purpose… [or] sporting activity.”

During our investigation KY’s “Unbridled Spirit” was definitely unchecked-an unhindered evil spirit of abuse & neglect. Investigators’ experienced a KY that has done nothing to protect the very animals they so readily use to market their state.

AA’s first KY investigation has revealed some of the main kill buyers and documented conditions of the horses and the sites. But this is just the start, more investigations will follow. Our goal is to collect and use evidence to create significant public awareness and to push hard for better laws and better enforcement, and to target offenders in the courts. When the time comes, AA’s investigations and evidence will be ready for KY’s next legislative session.

KY deserves a lot of our attention. It is truly needed here. To be in a real sense the “horse capitol of the world” requires genuine leadership and responsibility, not just a logo. KY should live up to the name they have given themselves.