As printed in the San Fransisco Chronicle 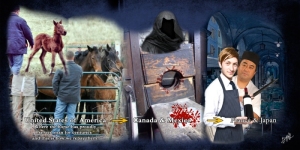 Nevada State agriculture officials have discussed ways to muster support for the slaughter of stray horses in Nevada, and the discussions stirred protests among advocates for the free-roaming animals.

Wild horse supporters plan a rally at the state Capitol on Friday to urge Gov. Brian Sandoval to call off next week’s scheduled auction of 41 wild mustangs they fear will end up at a slaughterhouse.

“The people who frequent these auctions are kill buyers,” said Carrol Abel, director of the Hidden Valley Wild Horse Protection Fund. “There is no reason these horses need to go out and be exposed to the slaughterhouse line.”

Newly disclosed state records show members of the state Board of Agriculture have discussed ways to build public support for slaughtering stray horses that roam the foothills southeast of Reno.

The board discussions more than a year ago were prompted by concerns about the safety of motorists on state highways where the animals increasingly are struck and killed.

Nevada is home to about half of all free-roaming horses in the West.

The mustangs in the Virginia Range are considered state property and do not enjoy the same protections as those on adjoining federal lands under the Wild Free-Roaming Horse and Burro and Preservation Act.

Minutes of a meeting of the state Agriculture Board in late 2011 make it clear that Agriculture Director Jim Barbee and board members are sensitive to the political and emotional ramifications of selling the animals for slaughter.

In fact, one member who also serves on a federal advisory panel on wild horses suggested in December 2011 they might avoid some regulatory roadblocks by trying to place any new slaughterhouse on U.S. tribal lands, according to the minutes of the meeting on Dec. 6, 2011.

Wild-horse advocates who requested the minutes from the Agriculture Department and provided a copy to the Associated Press plan to deliver more than 1,500 letters to Sandoval on Friday urging him to stop removing the horses from the range. Sandoval press secretary Mary Sarah Kinner did not immediately respond to requests for comment.