A Legendary Breed of Wild Horse Returns to Russia

Story by Svetlana Arkhangelskaya, special to RBTH as published in ‘Russia Beyond the Headlines‘

There are only about 2,000 Przewalski horses left in the world, but in October six endangered members of this species arrived in Russia. Scientists hope to restore them in the wild, and they are also betting that the horses will contribute to the restoration of the steppe ecosystem. 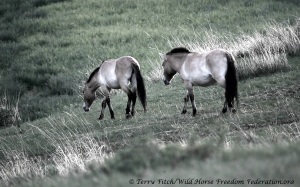 Zoologists say very few wild horses remain on earth, with the Przewalski horse counting among them. Of the less than 2,000 Przewalski horses left, 300 live in the wild and about 1,500 are in captive breeding programs and zoos. Le Villaret in France is one of the largest natural reserves for these horses.

Recently, six Przewalski horses were brought by plane from France to the Russian city of Orenburg as part of a new program to return them to their original habitat.

China and Mongolia launched their own reintroduction programs in the early 1990s. Also, a few horses were released, as an experiment, into the exclusion zone near the Chernobyl nuclear power plant in Ukraine. There, they began to actively proliferate despite the radiation. Now, according to scientists, the Przewalski horse population in the Chernobyl zone amounts to about 100.

Why they left the steppe

About 100 years ago this wild horse was still found in the Eurasian steppes — in the expanses of Russia, China, Mongolia, and Kazakhstan. But the Przewalski horse was driven from its original habitat by man’s development of cattle-breeding. When the horse could no longer roam freely over the expanse of the steppe, the animal perished.

Today, this steppe beauty can be seen only in zoos. Captivity, however, effects these horses adversely because in the wild they were in constant motion, covering many kilometers each day.

As in the case of European bison, when the number of horses in captivity reached a critical mass the question arose of returning the species to the wild. The horses were presented to Orenburg by the French Association for the Przewalski Horse (Association pour le cheval de Przewalski, or TAKH). At the Tour du Valat Biological Station, several generations of horses are kept in a fenced-off area, similar to their natural environment.

The steppe needs the horse

The reintroduction program was the brainchild of the Severtsov Institute of Ecology and Evolution at the Russian Academy of Sciences, and the Orenburg Reserve. Its steppe territory is the historic home of the Przewalski horse, and the steppe needs this horse to survive, literally.

“In steppe ecosystems these animals contribute to their recovery,” said Olga Pereladova, the head of the World Wildlife Fund’s Central Asian program. “If horses are not grazing in the steppe it deteriorates because vegetation is not trampled; overabundance of grass can cause fires.”

According to scientists, it is important not only that the horses have adapted to the new conditions of the Ural steppes, but also that they did not mix with farm-raised horses when stallions expelled competitors from the group.

In this case, the unique gene pool would be lost. That is why the animals were initially placed in the fenced-off reserve, allowing for enough time until a stable population capable of existing under natural selection could be formed. For this, it is necessary to have 1,000 horses, with half being of reproductive age.