“I studied geology as a result of closing my eyes and randomly pointing to a major from the academic catalog, and I never looked back…” 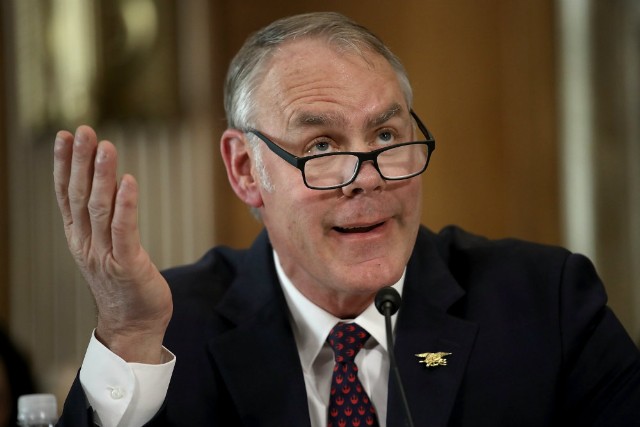 “So what’s the big deal, I haven’t told the truth on anything else and I am still here…duh.”

“I’m a geologist,” he said. “I can assure you that oil and gas in Bears Ears was not part of my decision matrix. A geologist will tell you there is little, if any, oil and gas.

Since becoming leader of the 70,000-employee agency, Zinke has suggested that he was a geologist or former geologist at least 40 times in public settings, including many under oath before Congress.

He uses it as a credential booster, saying things such as, “I can tell you, from a geologist, offshore mining of sand is enormously destructive environmentally, as in comparison to seismic,” as he told the House Natural Resources Committee last month.

And, “Florida is different in the currents — I’m a geologist — it’s different in geology,” in an interview with Breitbart News, defending his decision to exempt Florida from offshore drilling.

In May, he criticized the work of the US Geological Survey, saying at a press conference in Alaska that “I think the assessments of the USGS has done previous, I think they fall short, from a geologist’s point of view.”

Zinke, however, has never held a job as a geologist.

In his autobiography, Zinke wrote that he majored in geology at the University of Oregon, which he attended on a football scholarship, and chose his major at random.

“I studied geology as a result of closing my eyes and randomly pointing to a major from the academic catalog, and I never looked back. I am just glad I did not find electronics,” he wrote, adding that he was focused and a good student, and earned an outstanding academic achievement award his senior year.

After graduating, Zinke wrote that he considered a career in subsurface geological surveying, but after a meeting with a Navy commander, “I realized that I was doing a lot more thinking about SEAL activities — or what I thought SEAL activities would be — than I was about geological exploration and surveying.”

His LinkedIn page, his book, and various news clips piecing together his post-military life — compiled by the left-leaning group American Bridge — show that once Zinke retired as a SEAL he went into business and politics, never mentioning work in the field of geology.

Interior spokeswoman Heather Swift provided this statement to CNN: “Ryan Zinke graduated with honors with a B.S. in Geology. His intended career path was underwater geology – and he had college jobs to support that career. Upon graduation he was recruited to be an officer in the US Navy SEALs where he proudly served for 23 years and retired with the rank of Commander.”

Interior did not answer if Zinke is or has been a member of the American Institute of Professional Geologists or the Association of State Boards of Geologists.

Several geologists who CNN has spoken with have flagged his comments as disingenuous, saying that someone with a 34-year-old degree who never worked in the field is not considered a geologist.

“He seems not to be familiar with modern geologic knowledge,” said Seth Stein, a professor at the Department of Earth and Planetary Sciences and Institute for Policy Research at Northwestern University. “In particular, geologists now know that the climate is warming rapidly because of human activities. This is is causing many serious problems including rising sea level, which is a major threat to coastal communities.”

“I’m not sure Secretary Zinke was paying attention during those geology classes,” said Raul Grijalva, the top Democrat on the House Natural Resources Committee.

Zinke has, several times, fallen back on his geology degree to justify his decisions. For example, in a hearing in March before the Natural Resources Committee, Zinke said, “as a geologist, the fair proposition is if you’re going to develop on federal land, there needs to be a reclamation plan to make sure that it’s returned to as good or better condition than what you found it.”

And in December, when he ordered a nationwide survey of minerals, Zinke said, “right now the United States is almost completely reliant on foreign adversaries and competitors for many of the minerals that are deemed critical for our national and economic security. As both a former military commander and geologist, I know the risk this presents to our nation.”

In September, he touted fracking at a Heritage Foundation event, saying, “I’m a former geologist. I say ‘former’ because when I went to school, I was taught that we are going to be out of oil in 2003; that there was peak oil. That’s not possible with fracking.”

And in July, when discussion national monuments he was considering shrinking, Zinke was quoted in the Albuquerque Journal saying, “the area of the monument – it’s actually four separate parcels – is a ‘little disconnected,” he told reporters during a helicopter tour. “The boundaries are difficult to discern – between private, public, state lands,’ he said. ‘The features, as a geologist, I was particularly fascinated with the basalts and the volcanics – beautiful ground.”

In one Senate Appropriations hearing last June, Zinke called himself a geologist four times, including while discussing coal revenue and potential drilling sites.

“I’m a geologist,” Zinke said. “And I don’t consider myself a genius, but I’m a pretty smart guy.”

In addition, Zinke’s numerous rollbacks of environmental protections, wavering stance on climate change, and allegations by career staff that he suppressed certain reports have at least one Democratic member of Congress asking whether he should be using his college degree as a credibility booster.