Thoughts of My Heart in the Face of a Rising Storm

“We are going to do something a little different for ‘Feel Good Sunday’, today.

Over the past several weeks many long time advocates have contacted me with intense care and concern regarding the future safety and welfare of our wild equines, including the issue of predatory horse slaughter which also affects our domestic horses and donkeys.  Many of these advocates we have known for years and you can hear the tension an desperation in their words, we echo the same emotions.

My pat answer is that we can’t give up, we simply cannot turn our backs and slink back into the mass of lemmings that know not what is going on around them.  We have seen the brutality, witnessed the cruelty and heard all of the lies so we are forever changed and committed to do what is right, what is just, and what is in alignment with the circle of life.

We will fight on…and today, for Feel Good Sunday, our longtime friend and fellow advocate, Biologist Robert C. Bauer so eloquently pens our mutual thoughts and shares them with us, this day.

Today we will not publish laughs and frivolity, instead we will speak from the heart and hold each other closely as we tighten our cinches for another week of battle.

Be at peace, my friends, as you do not fight alone…we are an army of thousands on a crusade of compassion and caring.  In the end; good shall win over evil. 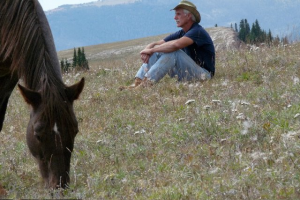 The wild horse and burro issue continues to grow in intensity,with what can only be described as a spiritual blackness emanating from those that consider them a nuisance. What eludes most in their understanding of nature, including wild equine, is that it offers itself freely as a beautiful gift when left to exist as nature originally intended, with its own space, own schedule, own numbers, own life principles.

It has much to teach, always speaking, but the truths that it is teaching mostly falling on deaf ears. Most of what nature teaches is profound if we open the door of our hearts to see. This includes the mustangs.

When mankind, without listening, attempts to artificially alter the numbers, characteristics, or parameters of this gift, through finite or selfish thinking, he has reduced it to nothing more than a commodity that can be bought or sold. The wild horses, or any other aspect of nature is not, however, a cheap commodity to be bartered. It opens itself up to be appreciated and understood, but not changed, much like the relationship between a man and woman. More so, mankind in his self-righteousness has always thought that he can manage nature better than nature can do itself, based upon static thinking. In every attempt the results have been destructive to something that is innately beautiful.

Now the stakes are even higher, and the blackness is worse, as we face the possibilities of this nation’s wild horses being reduced to the state that they were in prior to the WFRHB act.

Images of thousands of wild horses being rounded up, and then gunned down by a federal agency entrusted to protect them, run over and over in my mind. The battle cry is always the same, being that of overpopulation, and as a result a detriment to the rangelands. The very opposite is true.

No one knows exactly how many mustangs are left on this nation’s rangelands. Many will disagree with me when I state that their numbers may not even be in the teens of thousands anymore. With all my heart I want to be wrong. All that can definitively be said about this issue, is that there can’t be many remaining.  This assessment is based upon exaggerated claims of population growth by the BLM, which many times are well over 100% in error, adjustment of sex ratios, use of contraceptives, as well as natural mortality, which can range between 19% up to 75% annually, along with the thousands and thousands of wild horses rounded up.

Compensatory reproduction cannot biologically occur fast enough to fill the niche that has been left void, and the wild horses don’t behave themselves as though they are sex crazed rabbits after roundups. Predators, one of nature’s mechanisms of balance, may be few, in number, regardless are present. The predatory factor does not work independently, a misguided belief, but always in concert with all other mechanisms of balance so that where one may be lacking others will engage more vigorously to keep the wild horse numbers in perfect balance with coexisting flora and fauna. Coupled with this is the self-regulating nature of wild equine, in conjunction with environmental conditions.

Based upon these truths it can decisively be stated that this nation’s wild horses and burros do not need to be managed by artificial means. In truth, all that is necessary is to remove man-made restrictions placed upon them, including the unscientific concept of the appropriate management level, and monitor them for purposes of protection only. This, and the release of those in holding facilities, back to the wild, is needed.

Wild horses and burros are not overpopulated but extremely underpopulated, based upon the carrying capacity of the land. They need only to have the breathing room, so to speak, without artificial restrictions to be what they are and the amazing gift that they offer themselves to be.

They truly are, in many respects a benefit to the land and coexisting organisms. This is true of all nature’s creatures. I applaud the nonprofit organizations that are meeting the present threats head on in the courts. In general, however, the nation needs to be educated. Many don’t even know what is going on, and there needs to be a general understanding of ecological balance and how nature can regulate itself, if allowed.

I struggle in my heart as I watch the blackness growing, feeling as though I have failed many times in this team effort that requires the gifts of all of us. One is not greater than another, however, but we all have a necessary function and part to play in the battle, much like the diversity of organs in the human body.

So, we stand together against this growing threat.

I must believe, that eventually the roundups will stop, once and for all, that those in holding facilities will be released and not executed, that those in the wild will not be gunned down, or shipped to slaughter, and that balance and freedom for these true natives, will be restored.

For whatever part I play, I stand with the 80% in this fight.

Our forefathers stood and fought against overwhelming odds. So, can we, for these who are innocent.