THE WILD HORSES OF TWIN PEAKS

We have spent so much time addressing the inequities, injustices and cruelties surrounding the roundups, we sometimes forget to notice there is a beauty within all this ugliness, the reasons why we fight the fight.

I’ve been a Horsewoman for 17 years; I have never met a Horse that didn’t have something appealing, something to recommend itself to the world. You deserve to know them, the Twin Peaks bands, to know who you fight for.

Come with me and meet the Wild Horses of Twin Peaks.

By their nature, Wild Horses, when left to a natural progression, develop characteristics unique to their environments. The Twin Peaks bands are the Horses I observed and I owe it to them to try and bring them to life for you.

The dominant colors run the gamut from the Blue Blacks, beautifully tainted with brush strokes of pure white, to truly white Grays and Cremellos. There are variations and dilutions of Blue Roan and Blue Appaloosa and Black & White Paints. There are the occasional forays into rose and gold – Red Roans, Sorrels and Palominos, to break it up a bit. All the ‘standard’ Horse colors are represented to some degree, but a personal favorite and rare oddity is the nose-to-tail and hoof-to-hoof pure Pewter Grays, with no other color to be found on them, not even in their manes or tails.

The true treasure of the Twin Peaks Horses, however, must be viewed close up: Each of them, without exception, possesses a distinctive metallic sheen.

Over and over I saw ‘common’ colors, glowing brilliant in the sunlight, bringing out in Bays, Buckskins, Grullos and Duns an uncommon beauty, all clad in a coat of living metal. 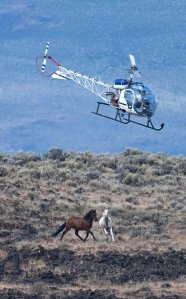 I’m no geneticist or anthropologist; I can only offer a humble opinion – that, over the generations, living in the high dry desert, in air virtually free of pollution’s haze, they have developed this reflective property as protection against the heat of an unforgiving Sun.

Through self-selective breeding, they have produced well-muscled bodies of excellent conformation. Many, particularly the Stallions, have deep, muscular chests and butts, physical developments that should run counter to this harsh environment but are, instead, a testament to Nature doing more with less.

These adaptations are not limited to their physical development. While observing at the short term sorting pens, they showed remarkable intelligence and a characteristic unique to higher minded beings – compassion.

Most stood calmly, as if assessing their predicament. One Stallion and his Mare – the leaders of the small band the Thesis Author had studied over her year-long research in this area – worked in tandem to keep others in the pen from fighting or panicking by running interference rather than through discipline. An unrelated yearling Palomino took cues from the pair and remained focused and observant. And all remained uninjured.

In another pen, three Mules, offspring, no doubt of illicit moonlit romances, stood shoulder to shoulder in a crowded pen with a collection of Horses, all alert and aware but undefeated.

There were occasional but rare bouts of panic, but all tried to be polite and respectful of one another.

When a truckload of infants arrived, the foals were already frightened and squealing for their mothers. The Mares responded but rather than a chaotic cacophony, each Mare called out, one at a time, in measured cadence, and the foals were quieted.

I’m sure the contractors and the wranglers would take credit for this if they could but the fact is you can’t achieve a good outcome without starting with a superior product. And these Horses are superior – in appearance, in intellect – products of a harsh, sun-beaten landscape of hills, gullies, canyons and draws where survival is contingent on control, to keep your herd safe; communication, to keep your herd close; and the willingness to save others in order to save yourself.

I had heard of the terrible fights among Stallions captured the day before, a natural response to the unnatural acts forced upon them. I had heard a story related of a Stallion who refused to follow his family into the trap but stood, calling them over and over. When he could not save them, he tried to call others to him, to head them away from the trap.

But this is a roundup and none will be spared. It will be left to humans to decide who will be saved and who will not. I saw these Horses twice – once from a distance and once in a cage – and even in these circumstances, their singular beauty and extraordinary intelligence were evident.

I hope, in some small way, I’ve been able to help you see them as well. 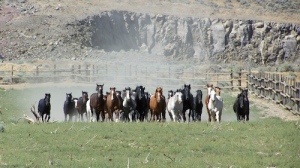 We ended the day at the Litchfield facility, where we were allowed to watch the release of the First Day Stallions into a huge holding pen. A mass raced toward us, the colors of a living thunder cloud – the Fathers and Sons of Twin Peaks, and the loss pummeled me once more. And I was left to wonder: Those who make these decisions – what do they see?

Categories: Horse News, The Force of the Horse, Wild Horses/Mustangs