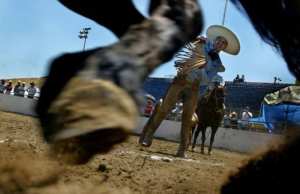 Unfortunately, the bill did not make it out of committee on Friday. I listened to the live stream and we owe a huge thanks to Senator Manendo who gave a very compelling opening when bringing the bill back for one last effort. Even Lee, who opposed the bill said his words were the most convincing he’s heard but said he had already committed. What was odd or perhaps a cover your you know what – was that he did not want the committee to take a vote so it wasn’t killed. He also said if there is any evidence of horse tripping in the state, he would support the bill next session. So we have to wait until a horse is injured or killed before he’ll support banning the practice.

The slippery slope argument is so lame but Lee and Roberson bought it and Rhoads, of course, wouldn’t support it no matter what was presented. Texas is a perfect example. One of the largest, if not the largest, rodeo states banned horse tripping and there has been zero impact. We hear from good sources that Rhoads, the cattlemen associations and farm bureau [once again] were also a driving force behind the opposition. It is mind boggling how they oppose every piece of legislation that is for animal welfare.

Below is a note from Eric Mills as well as the letter he sent. In addition, you may want to write other NV officials. I’ve heard from a few people already that said they would not be vacationing in NV this year because they are not going to give their hard earned money to a state that condones equine cruelty. As with all correspondence, please be polite and stay focused on the facts. You have a much better chance of being heard and taken seriously.

I sent the below Letter to the Editor to a bunch of Nevada newspapers.  I’m hoping each of you will do something similar.  AND A SUGGESTION – You might want to throw in a couple of lines about the opposition to the bill by the Reno Rodeo Association, and how this will NOT help them sell rodeo tickets.  Indeed, it implies that the Reno Rodeo condones horse tripping.

I’m including the email addresses for a number of papers, just to make it easy on you.

EMAIL ADDRESSES FOR NEVADA NEWSPAPERS – Most have a 250 word limit.

Subject: The Death of SB 364 (Copening) – to ban horse tripping

Letter to the Editor

A BETRAYAL OF HORSES

A sad for horses, the people of Nevada, and the democratic process.

On April 15, the Senate Natural Resources Committee let die SB 364 (Copening), without even taking a vote.  The bill would have outlawed the brutal practice of “horse tripping,” a standard event of the Mexican-style rodeo called “charreada.”  Only Senators Mark Manendo and David Parks supported the bill.  Senators Dean Rhoads, Michael Roberson and John Lee opposed it, despite overwhelming evidence of the need for the measure.

Charreada features nine events, three of which involve the roping of running horses by the legs, either front (“manganas”), or rear (“piales”).  Can you spell “insanity?”  This is not a standard ranching practice anywhere in the U.S., nor is it sanctioned by any American-style rodeo association.  Horse tripping is already banned in eight states:  California, Texas, New Mexico, Oklahoma, Arizona, Nebraska, Illinois, Maine and Florida.

Reportedly, Senator Rhoads and the rodeo/ranching community, in their paranoia, lobbied heavily to kill this bill, claiming it was a first step toward outlawing all of rodeo.  Nonsense!  All the horse pucky is obviously not in the arena.  The bill had NOTHING to do with sanctioned rodeo events.

Some media coverage might have made the difference.  Maybe next session.  Meanwhile, there’s to be a charreada in Winnemucca on April 30-May 1 (#50 Winnemucca Blvd., 11 a.m.)  Check it out.  And take a legislator with you.