(The News as We See It) by R.T. Fitch ~ President of Wild Horse Freedom Federation 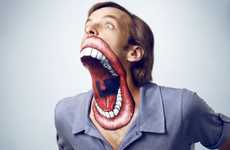 "Horse Eater" and Wallis Worshiper, only thing missing is the inserted foot.

The Equine Welfare Alliance (EWA) recently issued a press release on Obama’s campaign promise to ban horse slaughter, forever, and on the dark and shady antics of Wyoming State Rep. and infamous equine terrorist “Slaughterhouse” Sue Wallis and her mindless followers who allegedly defrauded the White House petition website in a feeble attempt to defend their perverse need to bring horse slaughter plants back to the U.S..

The release was published, here, and also at Horseback Magazine where a certain individual, who is obviously part of Wallis’ cult if not Wallis herself, began commenting and accusing Mr. John Holland of distorting the truth and facts…which is documented on NOT being the case.  Most readers, here, were engaged but one compassionate soul replied back to the avid horse-eater with the comment, below, and the dark little demon skittered off into the night to lick it’s wounds and has yet to show it’s slimy face in the daylight.  The truth always puts them away…

For your reading pleasure:

Who ever you are, don’t bother replying – I’m actually responding to you so that others reading here get the whole picture in case they are new to this issue. I’m not going to entertain any more of your nonsense, so just save it….

It’s obvious you are just plain dense or you are a paid hack, here to spout for your pro-slaughter lobby group and most certainly paid to do so. There is simply no other explanation for someone so ignorant to completely disregard reams of valid information you have been given over the past year right here in these comments. You have come to this site time and again with your backward, nonsensical “theories”, spouting this same garbage you do here today even though you’ve been schooled in facts by experts — PhDs, horsemen, even cattlemen, for crying out loud — right here on these pages and still you refuse to learn or accept any fact or truth.

What did you say your IQ was again? Didn’t disclose that? It’s pretty self-evident as the sign of an intelligent person is one who is able to modify and revise their thoughts and positions based on new information. Surely you’re way down into the double digit range because you fail miserably to acknowledge or accept that it is indeed a fact that the vast majority of US horses are given Bute at one time or another in their lives even with ample opportunity offered here repeatedly. Or more likely you are being paid by anti-HSUS forces or pro-horse slaughter devils…. don’t care and don’t want to hear more of your drivel but since you started it, I will press the REALITY you obscure and deny.

Facts — google to find sources, I realize you are not intelligent enough to do so but other readers might want to do so:

1. Veterinarians confirm that Bute is the single most effective and most commonly prescribed and used pain/inflammation relief medication for horses.

2. Millions of tablets are dispensed annually according to the drug companies which manufacture it.

3. No testing has ever been done on it for withdrawal times in horses because NO AMERICANS EAT HORSE (except for the little fringe group of sick and ignorant ones who do not care if they suffer disease from such a stupid act).

4. Most vets make sure their clients have it on hand while they also instruct it is only to be used for significant reasons and with vet approval — it’s not a panacea but it is vital to good horse care because of the nature of horses.

Just about every good horseman will have some Bute on hand “just in case” to help their horse through life’s little mishaps. These mishaps might be: a rope burn, a hoof abscess, an eye injury (corneal scratch), a serious flesh wound from pasture play or a mystery injury. Real horsemen know this happens to all horses, they turn up injured and the source is never really known or they find a way to injure themselves in even the most safely constructed horse facility. FYI, these mystery injuries happen to “using” horses and to show, trail, companion, retired, pet and to EVERY KIND OF HORSE – it’s part of being a horse. REAL horsemen attend to their animals when they find them injured and with their vet’s blessing they administer Bute to help ease the problem and help the animals recover. This is fact, plain and simple. That you can’t find people like this among the backward neanderthal horse-people you hang out with is not all that surprising. It’s obvious you and your kind do not care if an animal suffers – you’re probably so backward you still believe the earth is flat and only human animals feel pain. But the fact remains that the neanderthal 5% of the horse owner population who DO NOTHING to help their animals when injured DO NOT COUNT and should probably be brought up on abuse/neglect charges. So put that in your pipe and smoke it.

Now while American horses are getting Bute once, twice or several times in their lives for various ailments and injuries, our US food safety agency MANDATES that any animal given Bute EVEN ONCE IN THEIR LIVES are NEVER ELIGIBLE FOR SLAUGHTER for human consumption. I’m NOT going to cite again ALL THE LITERATURE available to any simpleton who can use google which gives irrefutable proof that:

1.) Bute DISQUALIFIES any animal from slaughter by mandate (slaughter is a method to produce food and is NOT EUTHANASIA);

2.) Bute has horrific debilitating and fatal affects on human beings when ingested (this is why it is BANNED, duh!); and

3.) Bute stays in the body of the horse – muscle, sinew, bone – indefinitely — there have been no studies to prove it EVER DISSIPATES, therefore THERE ARE NO WITHDRAWAL PERIODS allowed by law, PERIOD! See #3 above for more info about this FACT.

Fire up the pipe and smoke that too!

And for your information, there are many horse owners living in suburbia and in cities. They keep their horses in nice facilities (plain to fancy) in town or on farms/ranches out in the country and the vast majority of them have nothing to do with Hollywood. In case you had not noticed, the rural and agricultural population in this country is a very small minority. We work on Democratic principles in this country and majority rules – that means the minority DOES NOT SET LAW or CUSTOM, capice? No one cares if you feel downtrodden because we won’t allow your sick and twisted agenda from a perverted extremist fringe group to be promoted — majority rules. Humane and intelligent horsemen are the majority in this country – not people like you.

THE FACT REMAINS that you country bumpkins who callously treat your horses as if they were machinery without pain sensation are the definite minority – polls over 2 -3 decades prove this point. REAL American horsemen do not align themselves with the cruel heartless way in which people like you “care” for your horses. YOU ARE THE FREAK with your backward views such as horses have no pain sensation (therefore do not need horse “aspirin”/Bute), they do not deserve treatment when wounded/ill and slaughter=euthanasia. GET IT THROUGH YOUR HEAD: Horses feel pain, deserve treatment for wounds/illnesses, deserve a dignified caring end via humane euthanasia, and most of all: THEY ARE NOT FOOD!

So again, why don’t you just accept reality, accept you are part of a small minority of fringe extremists who are becoming more and more irrelevant and more reviled the more you talk your ugly and vicious talk. Quit with your whining, moaning and ridiculous posturing and accept reality. Until you do, you look like such a fool, a cruel, bitter and vicious one at that.

Please take your ugly self right out of this forum – the repulsive baseness, cruelty and blatant ignorance displayed is truly abhorrent to good and caring horse people everywhere. If you want to open your trap and spew more ignorant repetitive nonsense, try https://www.facebook.com/groups/unitedhorsemen/ — you’ll fit right in there with your queen, Sue Wallis, her jester, Davey boy, and all the other sick slaughter supporters, most recently rallying loudly to support the despicable disturbed and perverted girl from OR who does nude photos with dead horse carcasses with her boyfriend. You folks are the dregs of society – begone with yourself!

Categories: Horse News, Horse Slaughter, The Force of the Horse