Seth Tupper Journal staff From the From Salvation to Starvation: A three-part Journal special report series

Late last summer, Boyd Stambach, who’d been driving past the ranch of the International Society for the Protection of Mustangs and Burros near Lantry for years, finally had enough. 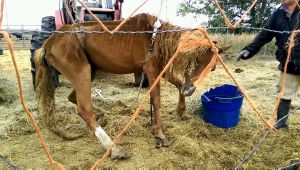 A tractor lifts the body of an emaciated horse Sept. 13 at the ranch of the International Society for the Protection of Mustangs and Burros near Lantry.
Courtesy photo

The horses at the ranch seemed especially thin; the pastures were worn down to the dirt; and there seemed to be no hay stored for the winter.

Stambach, who manages a feed store in nearby Eagle Butte, also knew about the organization’s financial troubles. He said the ISPMB owed the feed store enough money that he had quit doing business with the ISPMB and its president, Karen Sussman, and he knew a number of hay sellers who were owed money by the organization.

“I just decided, to hell with it, I’m making a call,” Stambach later told the Journal.

Stambach complained to the state Animal Industry Board, which sent a veterinarian to the ranch on Sept. 14. A report of the visit, which was unknown to the public at the time, described thin horses, some with overgrown hooves, and some nosing through their own manure in search of hay.

Even worse, the report described an open pit on the ranch containing more than 25 horse carcasses.

“Ownership does not appear to have the means, money, labor, and facilities to support and manage a population of animals this size,” the report said, “and does not appear to have adequate plans to assure the future of this herd. Based on my findings as outlined in this report, it is my determination that animal neglect is present at this facility.”

The finding of neglect laid a foundation for a potential criminal charge. The information was turned over to the state veterinarian and local prosecutors for their consideration while a sheriff made daily visits to the ranch to make sure the horses received food.

Meanwhile, ISPMB employee Colleen Burns, who had been living and working on the ranch since moving there from Arizona in April 2015, was gathering her own evidence of the deteriorating conditions.

Burns had initially come to the ranch seeking to devote her life to the care of wild horses. At the time, Burns recalled, she had great respect for Sussman.

“I was her No. 1 fan,” Burns said during recent interviews. “I considered her one of the world’s foremost experts on wild horses.”

As part of Burns’ compensation package from the ISPMB, she moved into a trailer house in the main ranch yard, just 100 yards or so from Sussman’s double-wide trailer.

It didn’t take long after arriving at the ranch for Burns to notice a lack of breeding controls and financial struggles. Then, this past spring, according to Burns, more than 100 foals were born. The spring grass was quickly eaten, and hay deliveries became sporadic as Sussman struggled to raise money and find hay sellers who hadn’t already cut ties with her because of unpaid bills.

Burns later claimed that horses began dying of starvation or related causes, and she said 30 or more died from June to September as she pleaded unsuccessfully with Sussman to seek outside help.

Burns worried many more horses would die during the coming winter months without a major intervention, and by the end of September there had been no such intervention, despite the damning report from the veterinarian. Burns saw no long-term plan emerging from Sussman or local authorities to keep the horses fed, so she decided to go public with her concerns.

At the end of September, Burns posted a written narrative along with photos and videos on the internet. She was promptly fired, but the images and footage of emaciated horses were reported by the Journal and other media outlets. A court-approved impounding of the ISPMB’s horses soon followed.

The sheriffs of Dewey and Ziebach counties, which have a border straddled by the ranch, are now caring for the horses on the ranch at the expense of taxpayers. So far, the two counties have spent $70,000 on hay.

The shocking imagery released by Burns caused many to wonder why nobody intervened sooner, before the situation grew so dire. The photographs showed some horses appearing nearly skeletal, with others that had overgrown hooves, and a few that appeared to have been eviscerated by wild animals.

Cheryl Rowe, of Rapid City, a former ISPMB supporter and board member, said two factors that worked against an intervention were the ranch’s isolation — it is 150 miles from Rapid City, the nearest major population center — and Sussman’s complete control over all aspects of the organization.

Rowe served on the ISPMB board for several years and can recall only once when a board meeting was held at the ranch; otherwise, Sussman controlled the board from afar. Sometimes the board consisted of a few people, Rowe said, and sometimes it seemed there were no active members on the board at all. Some board members resided in faraway states and some never visited the ranch.

“All the decisions were kind of hers,” Rowe said of Sussman. “She always put people on the board who trusted her to do the right things and make the right decisions.”

Yet there were a number of people who saw or sensed trouble at the ranch.

The state Animal Industry Board’s first complaint-driven visit to the ranch was in 2012, and two more visits were conducted in March and April this year before the penultimate visit in September. The board declined to release records of the earlier visits to the Journal, but the September report was forced into view as an attachment to the October impounding order. The report said conditions at the ranch had “declined significantly” since the previous visit.

Neighbors said they also knew Sussman was running a shoddy operation, but in the rural farming and ranching culture of the Lantry area, people tried to be neighborly and mind their own business. Shannon DePoy, who owns land adjacent to the ISPMB ranch, kept his concerns to himself until Sussman confronted him one day and demanded to see a summary of the pesticides and fertilizers he applied to his land.

DePoy said the hypocrisy of Sussman’s environmentalism irked him. While trying to be a careful steward of his own land, he said, he’d watched Sussman’s pastures turn bare. Her land was so overgrazed and littered with manure and overrun by burrowing prairie dogs that after heavy rains, DePoy noticed the runoff from the ISPMB ranch was black with filth.

“She just could not see what was obvious in front of her face,” DePoy told the Journal.

DePoy eventually complained to officials at the state Department of Environment and Natural Resources, but according to DePoy, they claimed a lack of jurisdiction because Sussman’s privately owned ranch is within the boundaries of the Cheyenne River Reservation.

People farther away from the ranch also had inklings of its problems.

In 2013, after Sussman acknowledged the deaths of more than 30 horses during Winter Storm Atlas, former ISPMB member Cathy Ritlaw said she pleaded with Sussman to build berms or other shelters or windbreaks for the horses. Ritlaw, who runs a small wild-horse sanctuary in Arizona, said the high death toll from the storm was an indication of poor infrastructure on the ranch.

Ritlaw said Sussman was in denial and refused to take action.

“I knew three years ago that something would come to a head someday and the truth would come out,” Ritlaw said. “I just had no idea anything could’ve been this horrible.”

Beyond casting wild-horse sanctuaries in a negative light, the revelations about the ISPMB have provided ammunition for those who think some wild horses would be better off in slaughterhouses than sanctuaries.

There are no horse slaughter plants in the United States, largely because of successful activism against them. Since news of the poor conditions at the ISPMB ranch broke, numerous commenters on the Journal’s website have labeled the case a prime example of the need for slaughtering options.

“This is the reason that not allowing slaughter in the US is a fool’s game,” one commenter wrote. “These horses would be better off in a dog food can than wasting away on the prairie.”

Sussman is trying to avoid that. She has reportedly allowed some horses to be adopted and has submitted a required management plan to the local prosecutors and the state Animal Industry Board seeking the return of 400 horses to her control.

Based on the judgment of prosecutors and the state Animal Industry Board regarding her management plan and funding, Sussman could earn the return of some, all or none of her requested 400 horses. Any horses that are not returned to her after Friday will be put up for adoption until Dec. 1, when any remaining horses will be sold at a public auction and likely sent to foreign slaughter plants.

“There are some bleeding-heart horse people across the country with deep pockets,” Stambach said. “Hopefully, she doesn’t raise enough money that she just gets to start this all over again with 400 head.”

The Journal made a surprise visit to Sussman’s ranch Oct. 4, five days after the disturbing images from her ranch went public and seven days before authorities seized control of the horses. She declined to speak on the record but allowed photographs of horses visible from the main yard of the ranch.

“Do they look like they’re starving?” she asked in a defiant tone.

The horses looked healthy. But what, the Journal asked, did she have to say about those pictures of emaciated and dying horses? She declined to speak about that.

And she appeared oblivious to the reality that without the donations of hay inspired by media coverage of her situation, the horses at the ranch would have had little to eat.

Besides firing Burns, Sussman also fired one of her two ranch hands, leaving only herself and the other ranch hand to care for 810 horses. At one point during the Journal’s visit to the ranch, Sussman slipped and was blown over by a strong wind. For several moments, she sat on the ground rubbing an aching knee.

Sussman finally broke her silence after a judge approved the impounding of the ISPMB horses on Oct. 11. In a lengthy written statement she provided to the Journal, she tried to defend her legacy.

“I have dedicated my life, my fortune, and my reputation to the protection of wild horses throughout the United States,” she wrote.

The statement acknowledged that “some” animal deaths had occurred on the ISPMB ranch but said the circumstances of the deaths were “wildly misrepresented” and Burns’ accusations contained “significant falsehoods.”

Yet the statement did not identify the falsehoods, or say how many horses died, or offer an explanation for the deaths.

Instead, Sussman used the statement to cast herself as a martyr. She referenced past occasions when she used her own money to pay the ISPMB’s expenses, and years when she went without a salary, and times when she sold personal property to raise money for hay.

Those sound like selfless sacrifices, but Burns, the whistle-blowing former ranch employee, said they also reflect a problem.

“The organization is not Karen Sussman,” Burns said. “And I think she forgot that somewhere along the line.”