Ironically, while the horse slaughter lobby has been claiming abandonment was a result of a lack of slaughter, it now appears it is in large part a result of the practice. 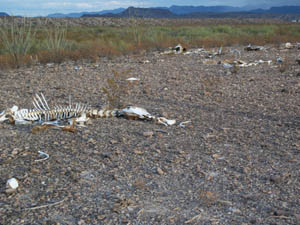 Chicago (EWA) – A six month investigation by the EWA and other animal investigation organizations has finally determined the predominant source of abandoned horses in the Southwestern US. The findings show that most or all of more than 5,000 horses a year are being abandoned after being rejected for slaughter at the Mexican border.

The investigation explains the source and reason for abandonments, most of which have been reported in the vast stretches of isolated land north of the Mexican border since 2009. Most of these horses could clearly be identified as domestic stock from such indications as nail holes in their hooves (where shoes had recently been removed) but no other clues to their source were found.

Until now articles about their discovery have speculated that they were abandoned by individual owners because they could no longer afford to feed them. The horse slaughter lobby has further suggested that this was made worse because individuals “no longer had a slaughter option”.

Equine advocates countered this hypothesis by pointing out that there had been no decrease in slaughter to force such actions, and that the areas where they were being found did not have significant domestic horse populations.

Moreover, it made no sense that someone who could not afford to euthanize and bury a horse would elect instead to pay for hauling it hundreds or thousands of miles only to turn it loose. In fact, many horse advocates had good reason to suspect the reports were bogus.

Following the closure of US horse slaughter plants in 2007, there were a large number of stories published claiming horses were being abandoned because of a lack of slaughter. These reports ranged from reclaimed strip mines in Kentucky to the Florida Everglades and Oregon ranches. For a year each of these was investigated and found to be false or hugely distorted.

But in the past two years there have been an increasing number of authenticated reports of abandoned horses, mostly in the remote stretches of the southwest Border States. A few of these horses actually had hide removed, apparently to obscure a brand.

In August, the first piece of the puzzle fell into place when approximately 300 horses were spotted from the air starving and dead in a remote feedlot near the port-of-entry town of Presidio, Texas. The fact that living horses were found in different stages of starvation and the dead horses were in various stages of decomposition, indicated they had been dumped there at different times.

The situation became all the more puzzling when it was revealed that the feedlot was operated by the C4 Cattle Company and Intermeat Inc./Dallas Crown the Belgian meat company that had formerly operated the Dallas Crown horse slaughter plant in Kaufman, Texas. The company buys horses for slaughter in Mexico. It was also discovered that about 40 of the horses came from kill buyer Trenton Saulters.

The question was of course why they had left the horses to perish only a few miles from the border crossing where they could have been sold to the slaughter plants in Mexico.

An answer came in the European Union’s (EU’s) report (DG(SANCO) 2010-8524 – MR) from the 2010 audit of their horse slaughter plants in Mexico. In section 5.2.1.2, the report divulged that Mexico had rejected 5,336 slaughter horses out of 62,560 presented at six OISAs (Border Crossing Offices) during the audit period between January and October 2010.

The horses were rejected under a new system of controls implemented in December, 2009. Reasons for rejection included health problems, advanced pregnancy and injuries.

The final piece of the puzzle came from an investigation by EWA on how the USDA’s APHIS (Animal and Plant Inspection Service) tracks horses bound for slaughter. EWA’s Valerie James-Patton was researching the Owner/Shipper certificate system which is supposed to allow APHIS to assure humane regulations are being followed. When asked what happens to horses rejected at the Mexican border, she was told simply “they fall out of the system.”

Normally kill buyers who haul slaughter horses to Mexico try to fill their trailers with cattle and other animals on the return journey. So clearly they need to dispose of the rejected horses, and the most economical way to do so is to simply abandon them on a deserted stretch of road or in an isolated lot.

Ironically, while the horse slaughter lobby has been claiming abandonment was a result of a lack of slaughter, it now appears it is in large part a result of the practice.