Equine welfare organizations denounce the agricultural  appropriations bill that if passed, would make equine slaughter for human consumption legal again in the US  and dump horsemeat that is unfit and unsafe on foreign markets

Washington, D.C. – Last night, November 14, 2011, a Congressional Conference Committee tasked with reconciling differing House and Senate versions of the FY 2012 consolidated appropriations for Agriculture, Commerce-Justice-Science and Transportation, issued a report failing to recommend de-funding of inspections of equines for slaughter for human consumption. This means for the first time since 2006, and in the midst of the worst recession since the Great Depression, Americans would be required to subsidize a foreign owned industry that exports horsemeat served as a delicacy in fine restaurants in some European and other countries.

Americans don’t consume horsemeat. Polls have consistently revealed over 70% of Americans oppose horse slaughter. “It is outrageous,” says Vicki Tobin, vice president of Illinois-based Equine Welfare Alliance, “that American taxpayers would be required to subsidize foreign owned businesses that Americans oppose and that produces meat from animals that are not raised for food”.

Simone Netherlands, founder of Respect4Horses, added, “In this time when the focus of Congress is supposedly on reducing spending and creating jobs it is a ludicrous measure to spend tax dollars in order to reinstate an inherently cruel predatory business, from which Americans stand to gain nothing. Horse slaughter plants operating until 2007 have never created a total of more than 178 jobs.”

In addition, American horses are not raised, fed and medicated within the FDA and European Union guidelines established for food animals, making them unfit and unsafe for human consumption. Equines are given many drugs banned in food animals such as pain killers, steroids, de-wormers and ointments throughout their lives.

A 2010 study in the Food and Chemical Toxicology Journal showed a drug given routinely to equines like aspirin, phenylbutazone or Bute, is a carcinogen and can cause aplastic anemia in humans. It has no withdrawal period. The FDA bans bute in all food producing animals because of this serious danger to human health. The recent EU FVO reports on U.S. equines exported to Canada and Mexico for slaughter show banned drug residues and falsified drug affidavits. (http://www.equinewelfarealliance.org/Horse_Slaughter.html)

The unsubstantiated claims of pro horse slaughter legislators such as Jack Kingston (Georgia) are that it will solve neglect and abandonment. All we have to do is look at Canada to confirm that this erroneous. They have had the same increases in neglect cases as we have here in the US. The often talked about GAO report states: We cannot rule out the effect of the economy. The demographic of people who hang on to their horses in spite of their inability to care for them, is the kind of demographic that does not want to send their horses to slaughter, therefore horse slaughter is not a solution for that demographic. One could argue that horse slaughter in fact makes people afraid to sell their horses to anyone for fear of them ending up in the slaughter pipeline. Even Kentucky Derby winners such as Ferdinand have ended up on someone’s dinner plate in a foreign country.

“In fact, it creates the problems it claims to solve,” says R.T. Fitch, co-founder and President of Wild Horse Freedom Federation “As a convenient and lucrative means of disposal, Horse slaughter has created an over-population problem of horses, by enabling irresponsible breeding, and encouraging a quick turn around and dumping of horses. Very much like the housing market and the banking industry, the horse breeding industry is self destructing by saturating the market and horse slaughter is the bail out”.

Equine Slaughter is a grave risk to public health, it is inherently inhumane and it causes the very problems it claims to solve. It is fiscally irresponsible for Congress even to consider re-funding these inspections.  The focus should be on stopping the risk altogether by ending the export of American equines for slaughter for human consumption.

“After all, there is a large market for dog and cat meat as well in China and Japan, does that mean that American tax payers should foot the bill to pay for the USDA to start inspecting dog and cat meat?” asks Richard “Kudo” Couto, founder of Animal Recovery Mission.

These equine welfare groups ask Congress to de-fund horse inspections and also protect the welfare of American equines by taking immediate action to pass the Horse Slaughter Prevention Act of 2011: 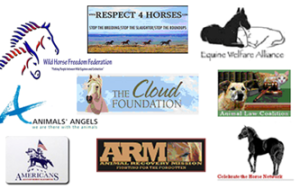 The Celebrate the Horse Network  (CTHN)